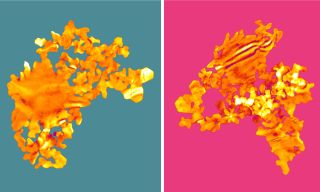 Scientists have invented a new form of gold that could be incredibly handy for use in medical technology, but sadly, it won't make much of a statement on your ring finger. That's because this gold is only 2 atoms thick — roughly a million times thinner than a human fingernail.

The researchers who created it call the gold "nanoseaweed" for its greenish hue and jagged shape under the microscope. According to a study published today (Aug. 6) in the journal Advanced Science, this barely visible bling is the thinnest form of gold ever created — so thin, it's technically two-dimensional.

Why make something so shiny, so tiny? Much like the absurdly strong nanomaterial graphene, the power of this gold lies in its surface-area-to-volume ratio, providing ample surfaces for chemical reactions to occur on without any filler material in between the sheet's two sides. It makes for an incredibly efficient nanomaterial that, the researchers claim, has myriad possible applications in medical technology and electronics.

"Gold is a highly effective catalyst," study co-author Stephen Evans, head of the Molecular and Nanoscale Physics Group at the University of Leeds, said in a statement. "Because the nanosheets are so thin, just about every gold atom plays a part in the catalysis. It means the process is highly efficient."

The researchers made this shiny seaweed by combining a solution called methyl orange (a substance usually used as a pH indicator, but used here as a "confinement agent" to limit the growth of gold) with a cocktail of other chemicals, including watery mixtures of gold and sodium.

After the mixture was spun in a centrifuge, the gold separated out into lopsided leaves that were 2 atoms thick. Subsequent lab tests showed that these leaves were effective at speeding up chemical reactions, making them a viable replacement for the bulkier forms of gold nanoparticles used across technology and medicine today, the researchers wrote.