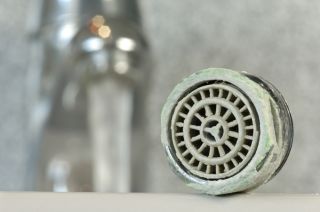 In some communities, it takes a lot of soap to properly wash your hands. This occurs in places with "hard" water, where high levels of calcium, magnesium and other alkaline minerals are found in tap water.

Scientists measure the hardness of water using a pH scale, which measures the hydrogen-ion concentration in the liquid. Water with a low pH is more acidic, while water with a higher pH is harder or more alkaline, meaning it is able to neutralize acids.

The pH scale measures substances on a scale from 1 to 14, with 7 being neutral. The U.S. Environmental Protection Agency recommends households have a water pH of between 5.5 and 9. Even within this range, however, hard water causes challenges.

If you have hard water coming from your tap, you need more soap for your hands and detergent for your laundry. If you have an aquarium, certain types of fish will die in hard water. And a buildup of alkaline deposits (aka lime deposits) can damage plumbing and appliances like washing machines and dishwashers.

A water softener works by binding the calcium and magnesium in hard water to a porous resin in the water softening unit, replacing those minerals with sodium chloride or potassium chloride.

In the United States, hard water is often found in streams. Some of the most alkaline waters are in Texas, New Mexico, Kansas, Arizona, and southern California, according to the U.S. Geological Survey. Softer water locations generally include Hawaii, New England and the Pacific Northwest.