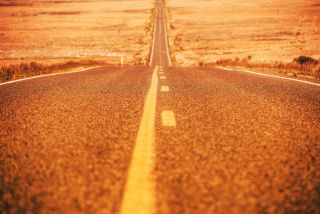 That's according to a new study from a burn center in Nevada. A group of surgeons at the University of Nevada School of Medicine, Las Vegas, identified 173 pavement-related burn cases between 2013 and 2017.

Twenty-four of those cases were due to motor vehicle accidents; the rest were due to various causes, such as falling to the ground. [Roasting? 8 Scientific Ways to Beat the Heat]

The team then looked at air temperatures on the days these burns occurred. More than 88% of pavement burns happened when temperatures were 95 degrees Fahrenheit (35 degrees Celsius) or higher. The risk of burns increased exponentially as the air temperature increased.

"The pavement can be significantly hotter than the ambient temperature in direct sunlight and can cause second-degree burns within two seconds," lead author Dr. Jorge Vega, a surgeon at the University of Nevada School of Medicine, Las Vegas, said in a statement. Second-degree burns damage the outer layer and part of the middle layer of the skin, causing blisters, redness and pain.

The pavement becomes much hotter than the air because it absorbs sunlight. On a 111 F (44 C) day, for example, the pavement could reach 147 F (64 C) if exposed to direct sunlight, according to the statement.

"Pavement burns account for significant burn-related injuries in the Southwestern United States and other hot climates with nearly continuous sunlight and daily maximum temperatures above 100°F," the authors wrote in the study.

And the Southwest isn’t the only region that faces such intense summer temperatures. Extreme heat waves recently cooked Paris to 108.7 F (42.6 C) and the United Kingdom to 101.7 F(38.7 C) — record-breaking temperatures for both countries.

The findings were published this year in the Journal of Burn Care & Research.