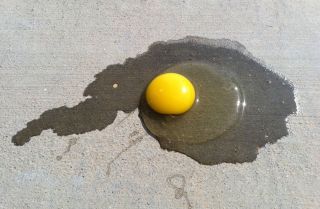 PHOENIX, AZ — It’s so hot today … Actually, it’s only 112 degrees Fahrenheit here today, nothing compared to Death Valley, Ca., which the National Weather Service says will see high temperatures near 130 through Monday. The hottest temperature ever recorded on Earth was 134 degrees Fahrenheit (56.7 degrees Celsius) in Death Valley on July 10, 1913. All this got me wondering about the old adage.

So I checked around. The science on whether you can fry an egg on the sidewalk is sketchy, but if ever there were a time and a place to try, it would be this weekend in Death Valley. It didn’t work in Phoenix. More on that in a moment.

However, another analysis points out that concrete — the stuff of sidewalks — tends to be light-colored and thus reflects more heat than it absorbs, and concrete is a poor heat conductor, so not all the heat from the concrete would transfer to the egg.

Even the Library of Congress chimes in on this one, noting that “once you crack the egg onto the sidewalk, the egg cools the sidewalk slightly.” The venerable institution expresses doubt, but leaves the door of possibility open a crack — noting that “the egg will not cook evenly.”

Circle back to Nye’s experiment, and you might reason that if temperatures reach 130 degrees in Death Valley, perhaps an egg on a sidewalk there could cook just by virtue of the heat in the air and the sunlight. That’s just a supposition, not a theory. If you decide to test it out, and it doesn’t work, and you’re hungry, try frying the egg on the hood of  your car. Metal is a much better conductor of heat, and will act more like a griddle. I’m not sure even that will work, however.

After researching all this, I figured I better do my own test. I tried to fry an egg on the sidewalk here in Phoenix at around 4 p.m. (again, it’s about 112 degrees out). I tried one directly on the sidewalk, and one in a fry pan on the sidewalk. After 5 minutes and no frying other then a thread-thin bit around the edges of the egg in the fry pan, I dumped that one onto the blacktop and gave them both another 20 minutes. The whites of both eggs congealed a bit — the one on the blacktop more so. They were still raw eggs, but the heat had caused a reaction of some sort.

It was a good science lesson for my son, but nothing got fried except my hand — by the sun-heated handle of the fry pan, and even that was just a momentary owie.

UPDATE: More than an hour after the experiment began, the egg on the sidewalk had changed (photo below). Not fried, just changed. Some of the white part that had spread out now seems to have evaporated or soaked into the sidewalk. Most of the rest of the white is congealed, but still translucent. The yolk is sagging oddly.