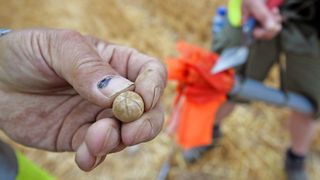 An army veteran who joined other soldiers with the "Waterloo Uncovered" campaign shows a musket ball uncovered at the 200-year-old battle ground in modern-day Belgium.
(Image: © Johanna Geron/Newscom)

Archaeologists have uncovered dozens of musket balls and the remains of amputated human limbs — which were likely sawed off without anesthesia — at the field hospital that serviced the British forces and their allies at the Battle of Waterloo, a fierce campaign that ended Napoleon Bonaparte's military career just over 200 years ago.

At the Battle of Waterloo, the British and Prussian armies defeated Napoleon's forces at the town of Waterloo, in what is now modern-day Belgium. (At the time, Waterloo was part of the United Kingdom of the Netherlands.) Napoleon's defeat led to the end of the Napoleonic Wars, which lasted from 1803 to 1815.

The dig is the first excavation on record of the spot, known as Mont-Saint-Jean field hospital, according to The Guardian. About 6,000 wounded men passed through the hospital during the battle, which raged on June 18, 1815. Musket balls found by the archaeologists are believed to have come from a previously unknown battle that boiled over near the farm where the hospital was set up. [Photos: Archaeologists Excavate Battlefield from Napoleonic Wars]

The excavation had already yielded big finds. Last week, in just half a day, the group found 58 musket balls in a cornfield, and they have since found dozens more with metal detectors, according to Waterloo Uncovered's blog. They also found a possible foot, an arm and three lower leg bones — the remains of limbs that had been sliced off during field amputations. One of the leg bones even had saw marks on it.

"Now, we have conclusive evidence of amputations taking place in the field hospital," Waterloo Uncovered reported on its blog. "The soldiers treated here would have suffered immensely — and if we are correct about the attack on the field hospital and subsequent evacuation of Mont‐Saint‐Jean, they did not even have a safe place to recover away from enemy fire. Many may have been forced onto horses even when they were in no condition to ride, in an attempt to escape death or becoming a French prisoner."

According to a historical document from Maj. George Simmons, a British army officer who fought at Waterloo, "[Sgt. Fairfoot] got me a horse. They tried to lift me upon it, but I fainted; some other officer took it. In consequence of a movement the French made with all their forces, our people were obliged to retire. If I stayed I must be a prisoner, and being a prisoner was the same as being lost. Poor Fairfoot was in great agitation. He came with another horse. I remember some Life Guardsmen helped me on. Oh what I suffered! I had to ride twelve miles [19 kilometers]."

The archaeologists and veterans also found a 6-inch-wide (15 centimeters) howitzer (artillery) shell, and coins and buttons dropped by soldiers on that fateful day, according to the blog.

Meanwhile, excavations in Russia have revealed more clues about the fate of people in Napoleon's Grande Armée. Last week, archaeologists announced they had found the body of Gen. Charles Etienne Gudin (buried under the foundation of a Russian dance floor), one of Napoleon Bonaparte's favorite generals. And near Kaliningrad, Russia, researchers have virtually reconstructed the slashed face of a French soldier who succumbed to his injury during Napoleon's failed Russian campaign in 1812.