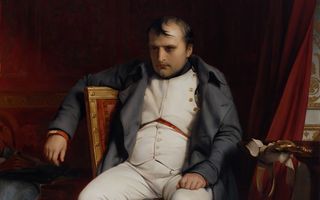 Napoleon's historic defeat at Waterloo may have been spurred by a volcano that erupted two months earlier, and nearly 8,000 miles (13,000 kilometers) away.

During the decisive battle on June 18, 1815, in what is now Belgium, mucky, wet conditions mired Napoleon's armies and lent a strategic advantage to his foes. But the heavy rainfall that flooded Europe during May and June that year may have resulted from a significant atmospheric disturbance in April, when an Indonesian volcano named Mount Tambora erupted, according to a new study.

Erupting volcanoes can spew towering ash plumes into the stratosphere, the second layer of the atmosphere, which extends to 32 miles (50 km) above the surface of Earth. Over time, gases from the eruption can create aerosols — air particles — that diffuse solar radiation, which can temporarily affect global climate. But exceptionally powerful eruptions can also generate electrical forces that propel ash particles even higher — into the cloud-forming ionosphere, from 50 to 600 miles (80 to 1,000 km) above the Earth's surface, Matthew Genge, a senior lecturer in the Department of Earth Science and Engineering at the Imperial College London in the U.K., reported in the study, which was published online Aug. 21 in the journal Geology. [The 11 Biggest Volcanic Eruptions in History]

Once in the ionosphere, electrically charged particles can further disrupt Earth's climate. And that's exactly what happened after the Mount Tambora eruption — it swiftly "short-circuited" the atmosphere and shaped weather in Europe, bringing Napoleon's army to its knees within months, Genge wrote in the study.

"The Year Without a Summer"

Mount Tambora's four-month-long eruption, which began on April 5, 1815, is the biggest volcanic eruption in recorded history; it killed approximately 100,000 people on the island of Sumbawa, and deposited enough ash on the ground to collapse nearby buildings, according to the National Center for Atmospheric Research (NCAR).

Scientists have long known that Tambora's eruption dramatically affected the global climate. The ash and airborne particles that it belched into the stratosphere circulated around the planet, leading to a drop in the average global temperature of 5.4 degrees Fahrenheit (3 degrees Celsius) during the following year. The gloomy, cold weather lasted for months in Europe and North America, and 1816 became known as "The Year Without a Summer," NCAR reported.

But it took months for those airborne particles to affect global weather, and it was previously thought that the unusually wet conditions in Europe during the spring of 1815 were unrelated to the volcano, Genge reported.

However, his recent findings about electrical forces in eruptions suggest otherwise. In simulations, Genge demonstrated that strong negative charges in a volcano's plume and in the particles would repel each other, pushing ash into the ionosphere.

"The effect works very much like the way two magnets are pushed away from each other if their poles match," Genge said in a statement.

Global weather data from 1815 is scanty, making it difficult to connect the 1815 eruption to subsequent meteorological disturbances, Genge wrote in the study. But more complete weather records from another powerful volcanic eruption in 1883 — Krakatoa, also in Indonesia — showed signs of ionospheric disturbance and weather disruption shortly after the volcano erupted, Genge reported.

Electrically charged, levitating ash following Tambora's 1815 eruption thus might have affected weather in Europe within weeks, long before ash particles in the stratosphere darkened European skies during the summer of 1816, according to the study.