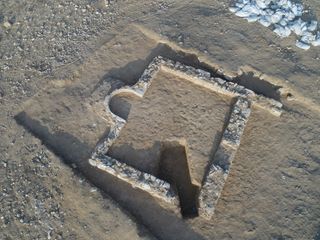 The remains of a humble house of worship have been discovered in Rahat, Israel.

While surveying the site before the construction of a new neighborhood, archaeologists uncovered the remains of a rural mosque, one of the earliest known from this region. The building dates to around A.D. 600 or 700, according to the Israel Antiquities Authority (IAA), when Rahat was far less populated farmland.

Unlike some of the large, urban mosques of that era, the newly-discovered structure was a simple, rectangular building that likely served farmers who lived nearby.

"A small rural mosque, dated to the 7th to 8th centuries C.E. [common era], is a rare finding anywhere in the world, especially in the area north of Be'er Sheva, where no similar building has previously been discovered," excavation directors Jon Seligman and Shahar Zur said in a statement from the IAA. [The Holy Land: 7 Amazing Archaeological Finds]

Given the rich cultural history of Israel, archaeological discoveries are common during new construction projects. Local youth and bedouin assisted with the digs as part of the IAA's Legacy Project, which pays youth groups to take part in archaeological excavations.

The mosque was an open-air building, identifiable by its mihrab, or prayer niche, which faced south, toward Mecca.

"These features are evidence for the purpose for which this building was used, many hundred years ago," Seligman and Zur said in the statement.

Nearby, the archaeologists found the remnants of a farm from the period, when Israel was a part of the Byzantine Empire, dating to around A.D. 500 to 600. They also discovered a settlement from the same time period as the mosque. That settlement was likely built just a few years after Muhammed, the founder of Islam, died in A.D. 632, during the Arab conquest of the Levant region (which includes Israel) in A.D. 636.

"The discovery of the village and the mosque in its vicinity are a significant contribution to the study of the history of the country during this turbulent period," Gideon Avni, the head of the archaeology division at the IAA and a lecturer at The Hebrew University of Jerusalem, said in the statement.

The mosque hints at the cultural and religious changes that came with Arab rulership, Avni said. Historical Islamic documents suggest that senior Arab officials were given plots of land, suggesting that the mosque and settlement could relate to this redistribution of property, he said. Further excavations may reveal more about the origin of the settlement, he added.

The settlement was likely agricultural, the archaeologists said. Buildings in the village were subdivided into rooms, storage spaces and open courtyards. Remnants of open-air ovens called tabbuns are still visible in the ruins.

Archaeologists are now working to determine how to integrate the archaeological site into the newly constructed neighborhood.