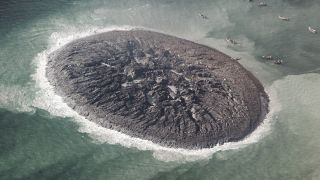 A mud island that burst from the waters off the coast of Pakistan during a deadly earthquake in 2013 has disappeared beneath the waves.

The 6-year-old island was the product of a "mud volcano," as Live Science reported at the time. Buried mud, subject to the intense pressures of the Arabian tectonic plate grinding against the Eurasian plate, liquefied and launched toward the surface. It moved so fast that it carried rocks and boulders on top of it. Those rocks ended up on the surface of the newly formed island, which was 65 feet high, 295 feet wide and 130 feet long (20 by 90 by 40 meters). The island was named Zalzala Koh (which means "Earthquake mountain" in Urdu), according to NASA. Now, satellite images show, it's pretty much gone.

"Islands produced by mud volcanoes in this region have a history of coming and going," NASA officials said in a statement. [5 Colossal Cones: Biggest Volcanoes on Earth]

The 7.7-magnitude earthquake that produced the island was cataclysmic, killing more than 320 people and displacing thousands. That same energy produced Zalzala Koh, but the quick-moving sediment didn't form an island built to last.

NASA images in intervening years have shown trails of eroded material in the water around the island as it's slowly shrunk over time, until the April 27 shot showed it entirely disappeared.

Still, Zalzala Koh isn't completely gone. Material still swirls in the water where it once stood, suggesting some portion of it still juts up from below the surface. And the same fissures that created it might produce more mud volcano islands in the future, according to NASA.