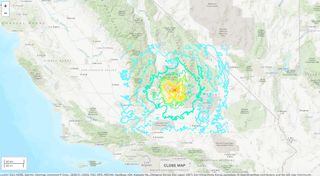 Late Friday (July 5), a magnitude-7.1 quake struck near the town of Ridgecrest, California, just a day after the same region experienced a magnitude-6.4 quake. Experts say the fault system is growing and even more quakes are likely in the coming days.
(Image: © USGS)

Another, even more powerful earthquake rocked Southern California on Friday (July 5). The temblor, which struck not far from the town of Ridgecrest in the Mojave Desert, registered as a magnitude 7.1, which is larger than the one that rocked the same general region on Thursday (July 4), according to the U.S. Geological Survey. That quake, a magnitude 6.4, was the largest to strike Southern California in 20 years, and was felt as far as Los Angeles.

Today's monster quake caused injuries, fires and rockslides, and left more than 3,000 people without power. Shaking was felt as far away San Jose, about 260 miles (418 kilometers) from Ridgecrest, the Los Angeles Times reported.

Since the magnitude-6.4 quake on Thursday, more than 1,000 aftershocks have struck the area, CBS News reported. So Friday's powerful ground-shaking was not a complete surprise.

In fact, seismologists warned earlier Friday that additional quakes were likely in the next week, and said there was a 9% chance of a quake larger than Thursday's temblor striking the area, Live Science reported. Seismologists now think that the fault system responsible for the quakes is growing, and residents of Ridgecrest and the nearby desert town of Trona can't breathe easy just yet. Aftershocks to this quake, which is now considered a "foreshock," are very likely, experts said.

"There's a 5% chance that this could be followed by an even larger quake," USGS seismologist Robert Graves said at a news conference on Friday, as reported by the LA Times.