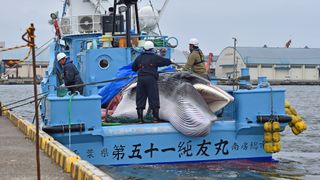 A captured minke whale is unloaded from a whaling ship at a port in Kushiro, Hokkaido Prefecture on July 1, 2019. Japanese whalers brought ashore their first catches on July 1 as they resumed commercial hunting after a three-decade hiatus.
(Image: © Kazuhiro Nogi/AFP/Getty)

Japan has officially resumed commercial whaling today (July 1) after more than 30 years of limiting whale hunts to "scientific" purposes — a policy that still resulted in the deaths of hundreds of whales every year, Reuters.com reported.

In December 2018, Japan announced that it would withdraw from the International Whaling Commission (IWC) moratorium on whale hunting, which began in 1985 to give endangered and overhunted whale species a chance to rebound.

Japan joined the compact in 1988, agreeing to only hunt whales for scientific purposes (such as collecting population data) — however, according to Reuters, the gesture did little to curb commercial whaling in Japan. From 1985 to 2017, Japanese vessels caught and killed nearly 17,000 whales, whose meat often ended up for sale in stores and restaurants after any research had concluded.

Today, Japan joins Iceland and Norway as the only nations to allow commercial whaling despite the IWC moratorium. Hunting will reportedly be limited to Japan's territorial sea and exclusive economic zone, which stretches about 200 nautical miles (370 kilometers) from the nation's coasts, Reuters reported, and the nation will cease whaling in Antarctic waters.

Whales living near Japan include minke and Bryde's whales (which are considered of "least concern" of extinction by the IUCN Red List of threatened species, which monitors animal populations around the world) as well as sei whales, which are listed as endangered.

The Japanese Fisheries Agency set a hunting quota of 227 whales for 2019. This is conservative compared to previous hunting activities; in summer 2017, for example, Japanese whaling vessels killed 333 minke whales in Antarctica alone — 122 of which were pregnant. (These hunts occured in the name of science).

Sachiko Sakai, a 66-year-old taxi driver in the port city of Kushiro, where five whaling vessels embarked for a commercial hunt this morning, told Reuters that whale meat is an important part of Japan's food culture. "The world opposes killing whales, but you can say the same thing about many of the animals bred on land and killed for food," Sakai said.

While whaling has been a part of Japanese culture for hundreds of years, modern demand for whale meat is extremely low. According to Reuters, whale makes up about 0.1% of all meat eaten in Japan in a year.

Japan's abandonment of the IWC moratorium follows years of pressure from the country's whaling industry, as well as from Prime Minister Shinzo Abe, whose constituency includes a city with a long whaling tradition, Reuters wrote.

As of Monday afternoon, one minke whale had been returned to shore to be weighed and butchered.