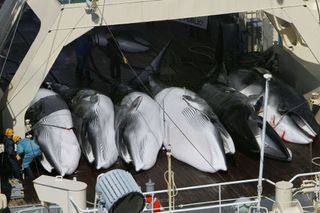 These whales were caught in the Southern Ocean by a Japanese whaling ship, witnessed by Greenpeace on December 21, 2005.
(Image: © © Jeremy Sutton-Hibbert, Greenpeace New Zealand, 2005)

The late Sir Peter Scott, one of the world's most famous conservationists, once said:  ''Many people now regard whales as a symbol. If we can't save the whales, then we begin to wonder if we will be able to save anything — including ourselves."

By the late 1980s, when it was clear that whale populations throughout the world were rapidly declining as a result of ruthless hunting over the decades and centuries, Scott was involved in the movement that led to the global moratorium on commercial whaling being put into place by the International Whaling Commission. The HSUS was centrally involved in that fight as well.

But since the enactment of the moratorium, the question becomes, what do you do when some countries will just not comply with a collective decision agreed to by the parties to the international convention dealing with whale policy? What do you do when one country continues to kill hundreds of whales each year and even does so in the Southern Ocean Sanctuary that was specifically intended to protect these animals ?

Australia has now shown us.

The political leaders of that nation proposed three years ago to take Japan to the highest court in the world — the International Court of Justice (ICJ) based in The Hague, Netherlands, over its whaling in the Southern Ocean. We at The HSUS and HSI (Humane Society International) all cheered. Like so many other people throughout the world, we were increasingly outraged by Japan's stubborn determination to continue killing whales for no good reason — since there's no real commercial value in whale oil and whale meat is already stacked up in freezers, with few consumers in Japan or anywhere else in the world having a taste for it. Japan not only thumbed its nose at the majority of nations that voted on resolutions declaring that it should cease its rogue activities, but it also recruited other countries, and doled out foreign aid to them in a transparent vote-buying scheme designed to allow Japan to withstand the indignation and resolutions of pro-whale nations.

Like so many abusers of animals , Japan tried to frame its ruthless killing in the most favorable light possible — attempting to disguise slaughter as science. The nation's leaders said the whaling fleets were conducting "research." Never mind that the meat is readily available in the marketplace, and the international scientific community found virtually none of the "science" relevant or compelling in any way.

The ICJ has just concluded its public hearings. Now the 16 judges disappear — probably for several months — to pore over the arguments and hundreds (probably thousands) of pages of evidence that have been presented to them by either side.

All of us at The HSUS and HSI hope the judges see through the smokescreen created by Japan and hold the nation accountable for its killing of the largest animals who have ever lived on our planet. If our international conventions are to have meaning, the responsible nations of the world must band together and make sure that the rule of law is honored.

Pacelle's most recent Op-Ed was New Legislation Could Yield Net Loss for Animal Welfare. This article first appeared as Japanese Whaling Tried in International Court on the HSUS blog A Humane Nation. The views expressed are those of the author and do not necessarily reflect the views of the publisher. This article was originally published on LiveScience.com .