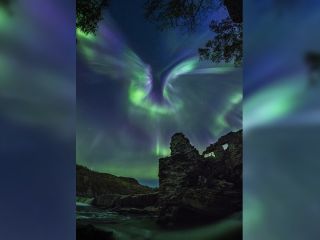 Against the star-spattered backdrop of the night sky in Russia, glowing green lights of a spectacular aurora rise in the shape of a giant firebird, its wings spread over an abandoned military power station.

Farther away from Earth, illuminated clouds of gas around a collapsed stellar core in the distant Helix nebula form the shape of a giant orb, reminiscent of the Eye of Sauron in the "Lord of the Rings" trilogy.

These astounding images are on the shortlist of entries to the Insight Investment Astronomy Photographer of the Year competition, organized by the Royal Observatory, Greenwich in the United Kingdom. The contest received over 4,600 entries submitted by photographers from around the world; from those, just over three dozen photos were selected for final consideration, representatives said in a statement. [See more of the contest's incredible astronomy photos]

Photographers from 90 countries trained their lenses on cosmic objects near and far: from radiant auroras to faraway stellar nurseries. Judges will select the winners in nine categories: Skyscapes; Aurorae; People and Space; Our Sun; Our Moon; Planets, Comets and Asteroids; Stars and Nebulae; Galaxies; and Young Astronomy Photographer of the Year, for participants ages 16 and under.

Two special entries — Best Newcomer and Robotic Scope Image of the Year — will also be awarded.

Notable images on the shortlist include a stunning photo of the moon made up of four panels, with each panel comprised of 30 images, photographer Miguel Claro of Portugal said in a statement. Claro captured the moon's pocked face in astonishing detail, revealing subtle color variations in its gray surface that hint at the chemical makeup of the lunar surface, and which are not usually visible to the naked eye.

Another stunning image, captured in Iran, shows the brightest section of the Milky Way galaxy looming over the peak of the volcanic Mount Damavand; with an elevation of 18,403 feet (5,609 meters), it is the Middle East's highest mountain and Asia's tallest volcano, according to the statement.

Contest winners will be announced Sept. 12 at an award ceremony at the National Maritime Museum in the U.K., according to the statement. Images that receive top awards will be featured in an exhibit at the museum starting Sept. 13.