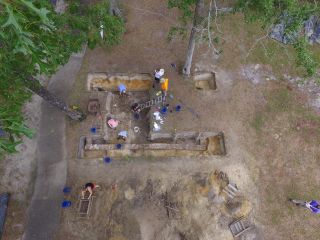 The hidden remains of a colonial building in Brunswick Town, North Carolina — a once-thriving port razed by British soldiers in 1776 — has been identified as a tavern (and possible brothel). This drone photo shows East Carolina University archaeologists excavating the ruin’s four corners in June 2018.
(Image: © Drew Conca/ Brunswick Town)

Last year, while walking through the ruins of Brunswick Town, North Carolina — a once-thriving colonial port burned by British soldiers in 1776 and never rebuilt — a local archaeology student discovered the ghost of a building that appeared on no known map.

Using ground-penetrating radar, the student detected a submerged structure measuring roughly 400 square feet (37 square meters) and buried under 5 feet (1.5 m) of earth on a spot of land that should have been empty, according to historic maps of the town. Now, following a monthlong excavation of the site, archaeologists from East Carolina University (ECU) have identified the ruin as a tavern — and possibly a brothel — that probably burned down years before Brunswick Town proper, sealing and preserving a trove of untouched artifacts from 1760s America.

According to Charles Ewen, an ECU archaeologist who led the excavation, the cache of artifacts in the building's belly is like a "time capsule" of the old port's history. [10 Biggest Historical Mysteries That Will Probably Never Be Solved]

"It's something every archaeologist hopes to find," Ewen told the Miami Herald in an interview. "It's a snapshot in time. Everything there got trapped."

The objects hidden in the building's crawls pace include the brass tap from a wine barrel, unused tobacco pipes, broken mugs and goblets, crushed liquor bottles, and other items typically found in a tavern. An Irish halfpenny dated to 1766 helps narrow down the tavern's latest possible date of operation.

Other objects — including thimbles, straight pins and fasteners that would have likely been used on women's garments — suggest that the tavern may have offered other services beyond the mere pouring of drink. (Bars in port towns often doubled as brothels, Brunswick Town site manager Jim McKee told the Herald).

However, it's hard to know for sure what transpired within the building's walls, considering the whole site remained unknown to history until a year ago. According to McKee, town land records suggest the tavern may have been built in the 1730s or 1740s by a local mariner before it burned down in an accident in the late 1760s, long before the rest of the town was razed at the start of the American Revolutionary War. When the tavern's walls collapsed, they fell over the floor, protecting the artifacts in the crawl space from the later fire and the worst ravages of time.

The archaeologists plan to return to the site next summer to continue excavating. Hopefully then, the researchers said, they will uncover the building's requisite fireplace, which remains hidden beneath the Earth.