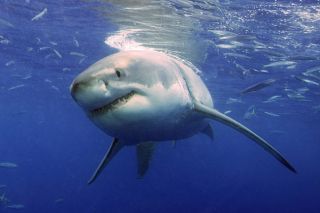 A new discovery helps explain why sharks — one of nature's most dangerous predators — are so good at catching their prey. They smell in stereo to help them home in on dinner.

A shark notes the precise time the scent of a potential meal reaches each of its two nostrils. If there is a small lag between the two, the shark knows to turn toward the side that caught the first whiff.

In trials, when a smell had no delay between nostrils, or the delay lasted too long, the sharks were just as likely to turn in one direction as another. The telltale lag is one that lasts less than half a second.

Previously, scientists thought sharks might be measuring differences in how strong a smell was in one nostril versus the other, rather than time lags.

"There is a very pervasive idea that animals use concentration to orient to odors," said study leader Jayne Gardiner of the University of South Florida. "Most creatures come equipped with two odor sensors — nostrils or antennae, for example — and it has long been believed that they compare the concentration at each sensor and then turn towards the side receiving the strongest signal. But when odors are dispersed by flowing air or water, this dispersal is incredibly chaotic."

The time lag theory could help explain some niggling shark mysteries, such as why hammerhead sharks have such odd-shaped oblong heads. Some scientists have thought maybe the shape helped improve that species' sense of smell, yet the animals didn't respond to odors at concentrations lower than other sharks. Now the researchers think perhaps the distance between nostrils could make for an even longer and more distinct time lag when the smell is coming from one direction compared with another.

"If you consider an animal encountering an odor patch at a given angle, an animal with more widely spaced nostrils will have a greater time lag between the odor hitting the left and right nostrils than an animal with more closely spaced nostrils," Gardiner said. "Hammerheads may be able to orient to patches at a smaller angle of attack, potentially giving them better olfactory capabilities than pointy-nosed sharks."

However, the new study didn't test hammerheads specifically, so this idea must be tested in further research.

The findings could also help design better underwater robots that use this time-lag smelling technique.

"Previous robots were programmed to track odors by comparing odor concentrations, and they failed to function as well or as quickly as live animals," Gardiner said. "With this new steering algorithm, we may be able to improve the design of these odor-guided robots. With the oil spill in the Gulf of Mexico, the main oil slick is easily visible and the primary sources were easy to find, but there could be other, smaller sources of leaks that have yet to be discovered. An odor-guided robot would be an asset for these types of situations."

The researchers report their findings in the June 10 issue of the journal Current Biology.