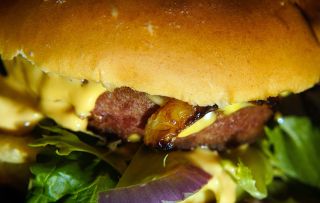 I ate a burger last night and it surprised me. It was delicious; it had that greasy burned-fat taste and smell, was chewy and tender at the same time, and dripped juice through my hands, sending another T-shirt to the laundry. It was all I craved in a burger. So what was surprising? It was made from peas.

Peas! My mind is still spinning. Growing up in a small Scottish village, a younger me saw peas as ghastly pellets my mother boiled until they were drained of color. I would push them around my plate and plead with her to let me skip them. One thing I was sure of: Peas were not burgers. [Busted! The 7 Biggest Diet Myths]

But here, last night, I discovered (perhaps later than some of you) that these leguminous pebbles have somehow been transformed into the culinary essence of meat. My nose, tongue and mind failed to distinguish these peas from the ground-up flesh of a cow — meat that, on warm summer evenings, I so enjoy forming into patties, tossing on the grill and devouring with eyes-closed bliss.

No wonder I was surprised. This was alchemy, the turning of base metal into gold. Heck, this was way beyond simply transforming one metal into another. This was "Star-Trek" food-replicator crazy, turning energy into matter — peas into meat!

Beyond the pure surprise, why does it matter that we transform matter - peas into meat? Humans have historically enjoyed eating meat. And economists have shown that, across the planet, as families claw their way out of poverty and their household incomes increase, their consumption of animal-sourced foods also rises.

Yet, as we know, producing meat from animals has huge impacts on Earth. This is particularly true for beef, as cows are terribly inefficient at converting energy into food-based calories as compared with pigs, chickens, insects and plants (in that order, least to most efficient). (Insects, you ask? Yes, hundreds of millions of people around the planet eat bugs every day. Plus, chickens love to eat insects, and we like to eat chicken.)

Today, demand for animal-sourced foods is increasing faster than the human population, which itself is expected to grow from 7 billion to 9 billion by 2040. The demand for meat will also go up as more people move out of poverty.

To satisfy this growing demand without further degrading the environment, we first need to switch livestock production away from cattle and other ruminants, like goats and sheep, and increase production of much more-efficient livestock, like pigs and chickens. Next, we need to incorporate insects, like mealworms and crickets, into the diets of chickens, farmed fish and people. These bugs have feed-to-body-weight conversion ratios as high as 1.8 to 1, meaning they can efficiently convert what they eat into food-based calories.

Ultimately, if people really want to continue the experience of eating meat, we will need to increase production and consumption of plant-sourced meat substitutes, like the magical burger that I devoured last night.

Thinking about that yummy pea-burger now, I wish my mother were still alive so I could tell her that I was wrong. Peas are absolutely delicious.