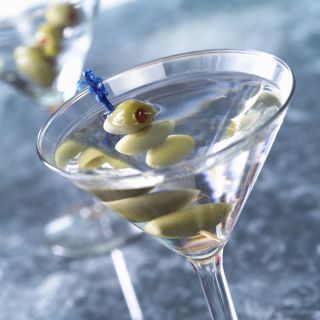 Scientists are reporting the first identification of a chemical basis for people’s preference for certain brands of vodka.
(Image: © iStock)

Premium vodka's popularity among social drinkers may rely upon the high-end liquor's internal chemical structure, researchers say. People can apparently detect such subtleties despite vodka appearing both colorless and tasteless.

Chemists analyzed the composition of five popular vodka brands, and found that each brand had different concentrations of certain clusters of molecules, called ethanol hydrates. Brand preference essentially translates into a preference for a certain distribution of these molecular clusters within the liquor.

"Even in the absence of 'taste' in the traditional sense, vodka drinkers could express preference for a particular structure," the researchers wrote in the Journal of Agricultural and Food Chemistry.

Vodka represents a solution of 40 percent pure ethanol and 60 percent pure water, so that all brands should theoretically have the same faint or undetectable taste. But the popularity of premium vodka brands in recent years may suggest otherwise.

The puzzle compelled chemistry sleuths at the University of Cincinnati in Ohio to team up with Moscow State University in Russia and try to pinpoint the source of vodka's appeal.

The new study started with the past work of Russian chemist Dmitri Mendeleev, known for developing the Periodic Table of Elements. Mendeleev's 1865 doctoral dissertation had observed that clusters of molecules called hydrates appear in solutions of 40 percent ethanol and 60 percent water.

That proportion of alcohol in classic vodka became enshrined as the legal standard near the end of the 17th century, based upon the Russian Czar's edict of 1698.

About a century later, Nobel Prize-winning chemist Linus Pauling suggested that hydrate clusters may consist of an ethanol molecule surrounded by a hydrogen-bonded framework of water molecules.

To follow up on those ideas, in the new study researchers ran tests on vodkas that included Belvedere, Grey Goose, Skyy, Stolichnaya, and OVAL, so that they could get the chemical fingerprints of each brand.

So-called pure ethanol clusters proved rarest of all, because they only appeared when the proportion of alcohol was 44 percent or greater.

The results show that vodka's legally prescribed 40 percent alcohol content strikes a balance where neither the pure water nor pure alcohol molecular clusters dominate. Instead, the cage-like structures of ethanol and water represent the most common clusters by far.

Just why each vodka brand differs in terms of these molecular clusters still remains unknown.

But in a toast-worthy development, the researchers have begun using computer simulations to investigate whether trace impurities affect the hydrogen-bonding that forms the links within molecular clusters, which could alter the distribution of the different clusters

Funding for the study came in part from OVAL Getrankproduktions und Vertriebs GMBH, one of the vodka brands examined by the researchers.