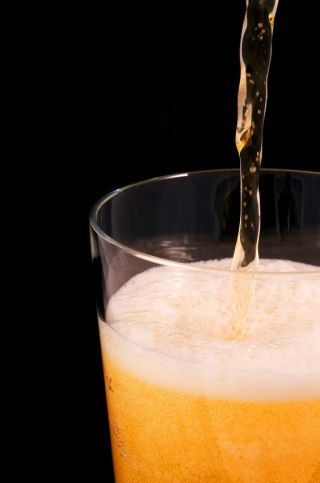 In the name of science, eight men and seven women drank alcohol through a straw while lying in an MRI scanner, presumably not all together, to see what would happen.

It went to their heads. Quickly, the researchers say.

Only 6 minutes after consuming an amount of alcohol equivalent to three beers — leading to a blood alcohol level of 0.05 to 0.06 percent, which impairs driving ability — changes had already taken place in the brain cells.

For one thing, the brain begins to run on the sugar in alcohol instead of using glucose, the normal brain food.

"That probably indicates that alcohol triggers changes in the composition of cell membranes," Biller said.

Whether there are long-term effects remains to be studied.

"Our follow-ups on the next day showed that the shifts in brain metabolites after moderate consumption of alcohol by healthy persons are completely reversible," Biller said. "However, we assume that the brain's ability to recover from the effect of alcohol decreases or is eliminated as the consumption of alcohol increases. The acute effects demonstrated in our study could possibly form the basis for the permanent brain damage that is known to occur in alcoholics. This should be clarified in future studies."

The findings, announced today, are detailed in the Journal of Cerebral Blood Flow and Metabolism. Previous studies of this kind had only been done on animals, the researchers said.