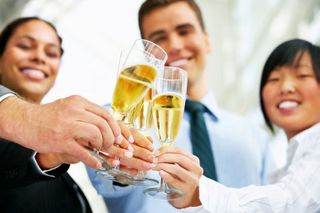 Champagne really is bursting with flavor. New research reveals the 10 million or so bubbles that pop from a glass of the sparkling wine carry loads of aromatic molecules that ultimately spray into the air right under your nose.

Bubbles and champagne are nothing new, as anyone who has uncorked a bottle, hoping for the ceremonious pop and subsequent flow of fizz, knows. But from a chemical perspective, that fizz, which is made up of loads of bubbles of carbon dioxide, has been relatively enigmatic. Only recently have scientists been equipped with sophisticated enough instruments to test the bubble process and the hidden chemicals.

"It's the first time that we have unraveled these fine chemical processes happening inside the tiny droplets ejected by the bursting bubbles [in champagne]," said study researcher Gérard Liger-Belaira of the Laboratory of Enology and Applied Chemistry at Reims University in France.

To get a chemical read on champagne, Liger-Belaira, Philippe Schmitt-Kopplin of the German Research Center for Environmental Health in Münich, and their colleagues placed microscope glass slides just above champagne poured into glasses. During a 10-minute stint, aerosols that came from the myriad bubbles collapsing at the air-champagne interface collected on the slides.

High-speed chemical analyses showed each bubble contained tens of aromatic compounds (precursors to aromas), and these compounds were more concentrated in bubbles compared with the rest of the champagne.

Here's how they think the sweet-smelling compounds burst from champagne: Aromatic compounds tend to be double-ended, with one side attracted to water and the other shunning it. So bubbles make for the perfect ferries, as the molecules can keep one end inside the bubble (sealed off from the liquid) and the other end touching the champagne.

Each bubble drags several scent-carrying molecules to the champagne's surface. And when these bubbles pop, they spray tiny jets of about five droplets into the air as aerosols. That's the primary way that champagne's burst of flavor tickles our noses.

In fact, much of the flavor in a food (or drink) comes from its odor. For instance, while the tongue can send basic information to the brain, such as whether a snack is salty, sweet, bitter, or sour, it's the nose that provides the more nuanced information on flavors, such as identifying something as chocolate or coffee, according to the American Academy of Otolaryngology — Head and Neck Surgery.

"During the early moments of champagne tasting you have the ejection of hundreds of tiny bubbles every second. This process enhances the flavor perception of the [sparkling] wine," Liger-Belaira told LiveScience.

The researchers say you don't need a doctorate to see for yourself the jets spraying from a glass of bubbly.

"I love the idea that such a wonderful and subtle mechanism acts right under our nose during champagne tasting," Liger-Belaira said. "In a single champagne glass, there is as much food for the mind as pleasure for your senses."

They are working with champagne producers to possibly come up with a way to enhance champagne aromas, he said.

Other researchers that contributed to the study include: Clara Cilindrea, Régis D. Gougeonb, Marianna Lucioc, Istvan Gebefügic and Philippe Jeandeta. The study will be published this week by the journal Proceedings of the National Academy of Sciences.