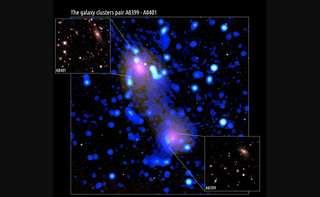 The galaxy clusters Abell 0399 and Abell 0401 are some of the most massive objects in the universe. In a new study, researchers have discovered a 10-million-light-year-long bridge of radio waves (shown in blue in this composite image) linking them, and it’s doing crazy things to electrons.
(Image: © DSS and Pan-STARRS1 (optical), XMM-Newton (X-rays), PLANCK satellite (yparameter), F. Govoni, M. Murgia, INAF)

On the big roadmap of the universe, bustling clusters of galaxies are connected by long highways of plasma weaving around the wilderness of empty space. These interspace roadways are known as filaments, and they can stretch for hundreds of millions of light-years, populated only by dust, gas and busy electrons driving very close to the universal speed limit.

Even when moving at near-light speed, particles should only be able to make it a fraction of the way down one of these filaments before running out of juice and breaking down. However, a team of astronomers patrolling a filament between two slowly colliding galaxy clusters has discovered a stream of electrons that isn't abiding by these traffic rules. In the gassy filament between the galaxy clusters Abell 0399 and Abell 0401, the researchers have detected a vast bridge of radio-wave emissions, created by charged particles whizzing down a 10-million-light-year-long road for far longer than should be physically possible.

The source of this cosmic traffic violation, according to a new study published June 7 in the journal Science, may be a faint but turbulent magnetic field stretching from one galaxy cluster to the next, providing a mysterious particle accelerator that's kicking electrons 10 times farther than they are ordinarily able to travel. [The 12 Strangest Objects in the Universe]

According to lead study author Federica Govoni, a researcher at the Italian National Institute for Astrophysics, this is the first time a magnetic field has been observed coursing through a galactic filament, and could call for some rethinking about how particles are accelerated over incredibly long distances.

"It is a very faint magnetic field, about 1 million times [weaker] than the Earth's," Govoni said in a video accompanying the study. However, she and her colleagues wrote in the paper, that may still be strong enough to emit shockwaves capable of re-accelerating fast-moving particles across incredible lengths as they slow down — effectively creating an electron superhighway.

A bridge between giants

Located about 1 billion light-years from Earth, Abell 0399 and Abell 0401 are neighboring galaxy clusters — groups of hundreds or thousands of galaxies all gravitationally bundled together, representing some of the most massive objects in the universe. In a few billion years, the two large clusters will probably collide; for now, they're about 10 million light-years apart and linked by the aforementioned highway of plasma.

In a previous study, Govoni and her colleagues discovered that the two clusters were each creating a magnetic field bristling with radio waves. In their new work, the researchers wanted to find out whether that field was extending into space beyond the bounds of the two massive objects — and, in particular, whether it could be riding down the vast plasma filament between them.

Using a network of telescopes called the Low-Frequency Array (LOFAR), the researchers saw a long "ridge" of radio emissions clearly connecting one cluster to the next.

"This emission requires a population of relativistic [near light-speed] electrons and a magnetic field located in a filament between the two galaxy clusters," the authors wrote in the study. Because there were no other obvious radio sources between the clusters, the team concluded that the ridge was most likely an extension of the magnetic fields and high-speed particle interactions occurring inside the clusters.

After running some computer simulations, the team found that even a relatively weak magnetic field (like this one) could create shockwaves strong enough to re-accelerate high-speed electrons that have slowed down and keep them whizzing down the length of the filament. However, that is only one possible explanation for a phenomenon that is, according to the researchers, still a pretty big mystery. Luckily, scientists still have a few billion years to solve it.