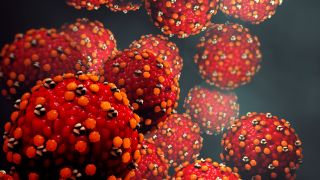 The number of measles cases reported in the U.S. is at a 27-year high.

The last time measles cases soared to this level was in 1992, with 963 cases reported for the entire year. We're not even halfway through 2019, and 971 cases have been reported, according to a statement from the Centers for Disease Control and Prevention (CDC).

In 2000, measles was declared eliminated from the U.S. But recently, this highly contagious disease has made a comeback — in part due to non-vaccinated clusters of people. Amid the numerous measles outbreaks across the country, scientists are warning that the U.S. is moving backward on the path to elimination.

Measles outbreaks have plagued New York City and New York's Rockland County, for example, for nearly the past eight months. (The CDC defines an "outbreak of measles" as three or more cases.) If cases continue to climb through the summer and into the fall, the U.S. could lose its measles elimination status, according to the statement. [27 Devastating Infectious Diseases]

"That loss would be a huge blow for the nation and erase the hard work done by all levels of public health," the CDC wrote. Before the measles vaccine was widespread, around 3 million to 4 million people would contract measles each year, and 400 to 500 of them would die from it, according to the statement.

The advent and widespread use of the vaccine, which is highly effective, led to the elimination of measles. The most common form of the vaccine given to children, the MMR vaccine, is 97% effective in protecting against the disease, according to the CDC. (The vaccine also protects against mumps and rubella, two other viral infections.)

"Measles is preventable, and the way to end this outbreak is to ensure that all children and adults who can get vaccinated, do get vaccinated," said CDC Director Dr. Robert Redfield in the statement.

The CDC recommends that children receive two doses of the MMR vaccine, the first between the ages of 12 months and 15 months, and the second between the ages of 4 and 6. But if traveling internationally (where measles can be more rampant), everyone 6 months and older should be protected by the vaccine, according to the statement. Babies 6 to 11 months old need one dose before traveling, and anyone older should have two doses, they wrote.

"Again, I want to reassure parents that vaccines are safe, they do not cause autism," Redfield said. "The greater danger is the disease the vaccination prevents."