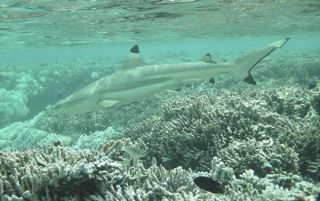 One of the world's most well-preserved coral reefs lies near the island nation of Kiribati in the Pacific Ocean, a new study reveals.

The Millennium Atoll is a remote coral atoll — an island consisting of a circular coral reef surrounding a lagoon — that is home to one of the world's few relatively pristine coral reef ecosystems. The atoll belongs to the Republic of Kiribati, a tiny island only a few miles long and 0.3 miles (0.5 kilometers) wide.

"It's one of the most spectacular places I've ever been to," said biology graduate student Katie Barott of San Diego State University, who was part of the team that studied the atoll.

Barott and her colleagues made a week-long scuba diving and snorkeling excursion near the unspoiled coral reefs, plunging more than 82 feet (25 meters) deep, to measure the coral cover — the number of living coral in a given area of the ocean floor — which was "phenomenally high," at nearly 100 percent, Barott said.

The research team also surveyed the fish species around Millennium and found spectacular examples of sharks, wrasse, and brilliant blue and green giant clams — though the smaller version that are only 6 inches (15 centimeters) to 1.5 feet (0.5 m) long.

While reefs cover less than 1 percent of the ocean globally, they are an integral part of coastal communities because of their high biodiversity and the economic benefits they provide in tourism and protection of coastal land from storms.

The remote nature of Millennium has allowed it to remain one of the few nearly pristine coral reef ecosystems in the world, but it is imperative that this ecosystem receives protection from human activities so that it may survive for future generations, Barott said.

Remoteness is a double-edged sword, however. While Millennium's coral reefs are pristine, the entire ecosystem is under threat from overfishing of its top predators, such as sharks, which could upset the balance of the ecosystem's food web. The island is so remote that any fishing regulations are difficult to monitor and enforce.

As with most coral reefs around the world, the lagoon communities of Millennium may be threatened by climate change and associated warming. If current greenhouse gas emission trends continue, 98 percent of present-day reef habitats will be too acidic by mid-century for reef growth, a 2007 study suggested. Also, climate change-related sea level rise and disease-spread could devastate corals.

"I'm hoping that by showing people how special this place is — by doing scientific surveys on the sea life around the lagoon — that they will realize their beauty and protect them," Barott said.

The study is detailed in the June 3 edition of the online, open-access journal PLoS One.