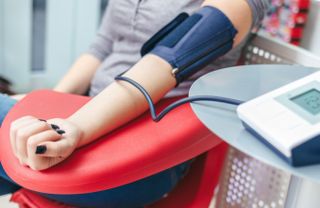 A simple squeeze to your arms and legs might benefit your brain — turns out, the added pressure may improve the regulation of blood flow to your brain as well as levels of stroke-protective molecules, a new study suggests.

The study found that people who wore an inflated blood pressure cuff on one arm and leg for minutes at a time experienced more controlled blood flow to their brains. This method also increased molecules in the blood previously suggested to play a protective role in the brain, such as in preventing stroke, a group of researchers reported today (May 29) in the journal Neurology.

Previous research has suggested that "training" organs by restricting blood flow — and therefore oxygen — to them through periodically compressing the arms and legs may make them more resilient when problems arise. [7 Things That May Raise Your Risk of Stroke]

For example, a trained heart may be more resistant to changes in blood flow during a heart attack. And such training may allow the brain to better regulate that organ's blood flow despite changes in blood pressure, a process called "cerebral autoregulation," the authors said.

The researchers are optimistic that these simple compressions to the arms and legs may help reduce the risk of stroke, but much more research will be needed before any conclusions about stroke prevention can be drawn.

In the new study, the researchers enrolled nearly 50 healthy people who were, on average, 35 years of age. Each person went through two consecutive days of blood pressure monitoring. On the second day, they were hooked up to blood pressure cuffs, one on the upper arm and one on the thigh.

Specifically, they found an increase in two biomarkers known to protect the nervous system. One of them, called the "glial cell line-derived neurotrophic factor," has been previously found to promote cell survival and help regenerate and restore damaged neurons.

They also found significant changes in the levels of biomarkers involved in regulating inflammation in the body. Inflammation is thought to play a role in a host of diseases, from diabetes and heart disease to Alzheimer's and depression. However, some of these markers promote inflammation, and some are anti-inflammatory, and it's unclear how changes to these markers might be beneficial or not to the brain, the authors reported.

"Although we cannot draw conclusions that [this intervention] can prevent stroke ... we still are optimistic," Yang told Live Science. The researchers note that the preventative effects aren’t proven and though this appears to be relatively safe, they don’t recommend people try this on their own without talking to their doctors.

This study "gives us a unique insight into how some of our patients with multiple stroke risk factors seem to avoid devastation with the inevitable onset of ischemic stroke," Dr. Paul Nyquist, a neurologist at Johns Hopkins University School of Medicine, and Dr. Marios Georgakis, a researcher at the Ludwig Maximilians University of Munich, wrote in an editorial accompanying the study. Neither of the editorial authors was involved with the study.

However, they note that this study was conducted on relatively young and healthy people and the results shouldn't be extrapolated to older adults or those with vascular diseases. "Thus, individuals with cerebrovascular disease who might actually benefit may not have the observed" response to the blood pressure cuff, they wrote.

Yang and the team hope to conduct follow-up studies to understand if these compressions might also help patients or subjects with a high risk of stroke.