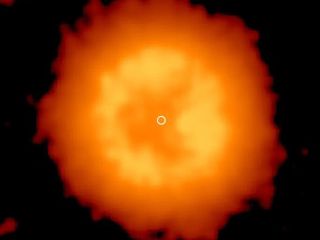 In this hazy nebula about 10,000 light-years from Earth, astronomers think they've found a star that came back from the dead thanks to a rare event called a double white dwarf merger. Soon, it could die again in a supernova explosion.
(Image: © Vasilii Gvaramadse/Moscow University)

Astronomers have discovered a star they believe has come back from the dead.

The star, located in a hazy nebula in the constellation Cassiopeia, is unlike most other stars. It shows no signs of hydrogen or helium — the two lightest elements in the universe and the final source of fuel for the nuclear reactions that power the hearts of stars. Despite this, it glows tens of thousands of times brighter than Earth's sun, and howls with a stellar wind that seems to have the strength of two stars.

Perhaps, write the authors of a new study published May 20 in the journal Nature, that's because this oddball star once was two stars — and two dead ones, at that. After some careful analysis of the star and the gassy nebula that surrounds it, the study authors determined that the star's unusual properties can be best explained by a rare phenomenon known as a double white dwarf merger. Essentially, two burnt-out stars got too close and collided, accumulated enough combined mass to start forging heavy elements again, and reignited. [The 12 Strangest Objects in the Universe]

"Such an event is extremely rare," study co-author Götz Gräfener, an astronomer at the Argelander Institute for Astronomy (AIfA) at the University of Bonn in Germany, said in a statement. "There are probably not even half a dozen such objects in the Milky Way, and we have discovered one of them."

Gräfener and his colleagues came across this potential Frankenstar's monster while observing Cassiopeia with an infrared telescope. There, they discovered a ragged gas nebula with a bright star burning at its center. Strangely, the nebula didn't seem to emit any visible light, but only shined with intense infrared radiation. This, plus the nebula's distinct lack of hydrogen and helium gas suggested that the mystery star at the center of the nebula was a white dwarf — the shriveled, crystalline husk of a once-mighty star that has run out of fuel.

However, if the star was dead, it certainly wasn't acting the part. Quite the contrary — it seemed to be working its fiery butt off burning something, possibly oxygen and neon. Further observations showed that the star shined with infrared light 40,000 times as bright as Earth's sun, and belched out solar winds that sped through space at about 36 million mph (58 million km/h) — far stronger than a single white dwarf should be capable of, the researchers wrote.

A dance of the dead

Something, it seemed, had reanimated the dead star. The team ran some simulations, and found that all the star's surprising properties — including its exceptional wind — fit with a double white dwarf merger event.

"We assume that two white dwarfs formed there in close proximity many billions of years ago," study co-author Norbert Langer, also of AIfA, said in the statement. "They circled around each other, creating exotic distortions of space-time, called gravitational waves."

While creating these waves, the dead stars gradually lost energy and drifted closer and closer together. Eventually, the researchers hypothesized, the dwarfs collided, merging into a single star with a great enough mass to start forging heavy elements again. The fires were rekindled, and two dead stars were reanimated as one living one.

It sounds unlikely, but it's not unheard of in our weird universe. A 2018 study in the Monthly Notices of The Royal Astronomical Society predicted that as many as 11% of all white dwarfs may have merged with another white dwarf at some point in their history. However, according to the authors of the new study, only a handful of those are likely to exist in the Milky Way.

Finding one is sort of like winning an astrophysical lottery — except, instead of getting a big, six-figure check, the winners get a supernova. That's the likeliest fate for this revived star, the researchers wrote, as it quickly burns through its fuel reserve. Within a few thousand years, the star will probably be running on empty again, and will ultimately collapse under its own gravity. The star will blast away its outer shell in a dazzling explosion, crunch down into a hyper-dense neutron star and, finally, return to the cosmic graveyard.