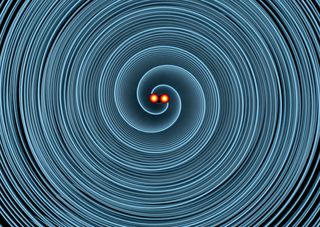 Gravitational waves may leave a lasting mark on the universe.
(Image: © Shutterstock)

The universe might "remember" gravitational waves long after they've passed.

That's the premise of a theoretical paper published April 25 in the journal Physical Review D. Gravitational waves, faint ripples in space and time that humanity has only in the past few years managed to detect, tend to pass very quickly. But the authors of the paper showed that after the waves pass, they might leave a region slightly altered — leaving behind a sort of memory of their crossing.

These changes, which the researchers termed "persistent gravitational wave observables," would be even fainter than the gravitational waves themselves, but those effects would last longer. Objects might be shifted slightly out of place. The positions of particles drifting through space might be altered. Even time itself might end up slightly out of sync, running briefly at different speeds in different parts of Earth. [9 Ideas About Black Holes That Will Blow Your Mind]

These changes would be so minuscule that scientists would barely be able to detect them. The researchers wrote in their paper that the simplest method for observing these effects might involve two people "carrying around small gravitational wave detectors" — a joke because detectors are quite large.

But there are ways researchers might detect these memories. Here's the most obvious one: looking for shifts in the mirrors of existing gravitational-wave detectors.

Those waves originate from massive events, like when black holes and neutron stars collide very far away in space. By the time they reach Earth, though, the waves are barely noticeable. Their long-term effects are even less evident.

But the mirrors in detectors are constantly measured in such a precise way that, over time, the shifts that the gravitational waves cause might become so intense that researchers will be able to spot them. The researchers came up with a mathematical model that predicts how much the mirrors should shift over time with each wave passing.

The other methods humans might use to detect these long-term effects involve atomic clocks and spinning particles.

Two atomic clocks placed some distance from each other would experience a gravitational wave differently, including its time-dilation effects: Because time would be slowed more for one clock than the other, subtle differences in their readings after a wave passed might reveal a memory of the wave in the local universe.

Finally, a tiny spinning particle might change its behavior before and after a wave's passing. Suspend it in a chamber in a lab, and measure its rate and direction of spin; then measure it again after a wave passes. The difference in the particle's behavior would reveal another kind of memory of the wave.

This theoretical paper, at the very least, gives scientists an intriguing new way to look at building experiments to study gravitational waves.