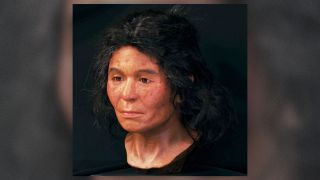 A facial reconstruction of the Jomon woman, who lived about 3,800 years ago on what is now northern Japan.
(Image: © Photo by Nation Museum of Nature and Science, Tokyo)

And it turns out, from that perspective, she looks very different from modern-day inhabitants of Japan. The woman, who was elderly when she died, had a high tolerance for alcohol, unlike some modern Japanese people, a genetic analysis revealed. She also had moderately dark skin and eyes and an elevated chance of developing freckles.

Surprisingly, the ancient woman shared a gene variant with people who live in the Arctic, one that helps people digest high-fat foods. This variant is found in more than 70% of the Arctic population, but it's absent elsewhere, said study first author Hideaki Kanzawa, a curator of anthropology at the National Museum of Nature and Science in Tokyo. [Photos of Samurai: The Last Century of Japanese Warriors]

"Hokkaido Jomon people engaged in [not only] hunting of ... land animals, such as deer and boar, but also marine fishing and hunting of fur seal, Steller's sea lions, sea lions, dolphins, salmon and trout," Kanzawa told Live Science. "In particular, many relics related to hunting of ocean animals have been excavated from the Funadomari site," where the Jomon woman was found.

Who is Jomon woman?

Jomon woman lived during the Joman period, also known as Japan's Neolithic period, which lasted from about 10,500 B.C. to 300 B.C. Though she died more than three millennia ago — between 3,550 and 3,960 years ago, according to recent radiocarbon dating — researchers found her remains only in 1998, at the Funadomari shell mound on Rebun Island, off the northern coast of Hokkaido.

But Jomon woman's genetics have remained a mystery all these years, prompting researchers to study her DNA, which they extracted from one of her molars. Last year, the researchers released their preliminary results, which helped a forensic artist create a facial reconstruction of the woman, showing that she had dark, frizzy hair; brown eyes; and a smattering of freckles.

Her genes also showed that she was at high risk of developing solar lentigo, or darkened patches of skin if she spent too much time in the sun, so the artist included several dark spots on her face.

"These findings provided insights into the history and reconstructions of the ancient human-population structures in east Eurasia," said Kanzawa, who was part of a larger team that included Naruya Saitou, a professor of population genetics at the National Institute of Genetics in Japan.

Now, with their study slated to be published in the next few weeks in The Anthropological Society of Nippon's English-language journal, Kanzawa and his colleagues are sharing more of their results. Jomon woman's DNA shows, for example, that the Jomon people split with Asian populations that lived on the Asian mainland between 38,000 and 18,000 years ago, he said.

It's likely that the Jomon people lived in small hunter-gatherer groups, likely for about 50,000 years, Kanzawa noted. Moreover, Jomon woman had wet earwax. That's an interesting fact because the gene variant for dry earwax originated in northeastern Asia and today up to 95% of East Asians have dry earwax. (People with the dry earwax variant also lack a chemical that produces smelly armpits.)

Despite her differences from the modern Japanese population, Jomon woman is actually more closely related to today's Japanese, Ulchi (the indigenous culture of eastern Russian), Korean, aboriginal Taiwanese and Philippine people than these populations are to the Han Chinese, Kanzawa said.