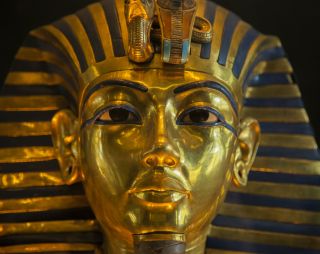 About 29 million years ago, the sands of the western Egyptian desert melted and created tiny pieces of canary yellow glass — some of which ended up decorating King Tut's pectoral (chest ornament).

This natural glass, found across thousands of square kilometers in western Egypt, is thought to have originated from one of two events: either a meteorite impact on the surface of Earth or an airburst, an explosion that happens when a space rock enters our planet's atmosphere. [Photos: Giant Spiral Grows Out of Egypt's Desert]

A new study suggests it's the former. The glass once contained pieces of a rare "shocked" mineral called reidite, which forms only during a meteorite impact, researchers from Australia and Austria reported May 2 in the journal Geology.

The heat created by either the meteorite impacts or an airburst would have been enough to liquefy the sand in the desert, creating the glass particles. But while airbursts create shock waves up in the air that can be thousands of pascals (a unit of pressure), asteroid impacts cause shock waves of billions of pascals on the ground, the researchers wrote. (In other words, meteorite impacts create shock waves that have millions of times more pressure than those created by airbursts.)

These ground-based shock waves, but not the airbursts, are strong enough to also create reidite.

In the new study, the researchers analyzed grains of the mineral zircon found in the glass; the scientists discovered that it contained evidence of the former presence of reidite.

In other words, its constituents are oriented in a way that indicates a once-present reidite transformed, at one point, to zircon. This provides the first "unequivocal" evidence that the glass was created by high-pressure shock waves, and thus from a meteorite impact, the researchers wrote in the study.

"Meteorite impacts are catastrophic events, but they are not common," co-author Aaron Cavosie, a senior research fellow at Curtin University in Australia, said in a statement. "Airbursts happen more frequently, but we now know not to expect a Libyan-desert glass-forming event in the near future, which is cause for some comfort."