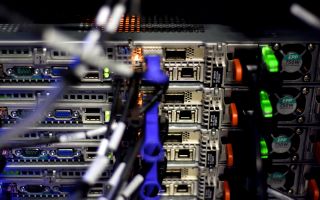 The P3 (platform performance prototype) at the University of Cambridge, used to test the design for the Science Data Processor, a new supercomputer that will be the fastest in the world.
(Image: © SDP Consortium)

The fastest supercomputer in the world will soon be outpaced by a newer, swifter rival.

Scientists recently completed the engineering design for the first of two paired supercomputers called the Science Data Processor (SDP). Together, these supercomputers will manage vast quantities of data collected by the Square Kilometre Array (SKA), a network of radio telescopes in Perth, Australia, and Cape Town, South Africa, SKA representatives said in a statement.

An international team of researchers representing 11 countries collaborated for five years to produce the hardware, software and algorithms to drive the first of the two supercomputers, according to the statement. [9 Supercool Uses for Supercomputers]

When completed, the powerhouse processors — one installed in Perth and one in Cape Town — will wrangle 600 petabytes (1 petabyte is equal to a million gigabytes) of data per year, or "enough to fill more than a million average laptops," said Maurizio Miccolis, an SDP project manager based in the United Kingdom.

Researchers estimate that SDP will operate at 250 petaflops, or 250 quadrillion calculations in an instant, making it 25% faster than IBM’s Summit, "the current fastest supercomputer in the world," Miccolis said.

At the same time that SDP is moving enormous amounts of radio telescope data at record speeds, the supercomputer will also conduct nearly real-time data analysis to sift signal from noise, according to SDP representatives.

"SDP is where data becomes information," SKA data-center scientist Rosie Bolton said in the statement. "This is where we start making sense of the data and produce detailed astronomical images."