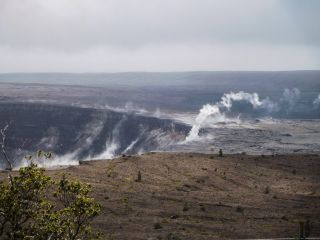 On Wednesday evening (May 1), a man plummeted into Hawaii's Kīlauea caldera — and survived.

The man had climbed over a railing at the Steaming Bluff overlook to get closer to the edge of the cliff, which dropped down 300 feet (91 meters) into the caldera. At about 6:30 p.m. local time, he lost his footing and fell, according to a statement from the National Park Service.

A search team found the man a couple of hours later "alive, but seriously injured," according to the statement. He had fallen onto a narrow ledge about 70 feet (21 m) down from the cliff's edge. Using ropes, a stretcher and a helicopter, the rescue team airlifted the man to Hilo Medical Center. [Photos: Fiery Lava from Kilauea Volcano Erupts on Hawaii's Big Island]

Army officials said he was a Schofield Barracks soldier who was on a training mission in Pohakuloa, Hawaii. The 32-year-old man was in stable condition on Thursday, according to Hawaii News Now.

Kīlauea, though not currently erupting, is one of the most active volcanoes on the planet — just last year, a large eruption destroyed 700 homes and forced thousands of people to evacuate.