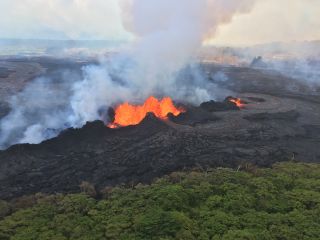 Eruptions aren't anything new on Kilauea. In particular, the Pu'u 'Ō'ō vent, where lava is visible, has erupted almost continuously since January 1983. But the latest eruption took volcanologists by surprise when it invaded Leilani Estates, a residential area near Kilauea.

Signs of trouble began in mid-March, when increased magma in the system prompted the Pu'u 'Ō'ō vent to inflate in size, like when a chef pumps cream into a cream puff, Janet Babb, a geologist and Hawaiian Volcano Observatory spokesperson, previously told Live Science. This surge of magma ultimately caused Pu'u 'Ō'ō's crater floor to collapse on April 30. After this, the excess magma traveled southeast toward the residential Puna District, Babb said. [Photos: Fiery Lava from Kilauea Volcano Erupts on Hawaii's Big Island]

Small earthquakes had shaken the region all that week, but residents were taken aback by 5.0- and 6.9-magnitude earthquakes on May 3 and 4, respectively, which preceded lava eruptions. Now, newly opened fissures are bubbling with lava almost daily, and Hawaii County Civil Defense has warned sightseers to stay away for safety's sake.

Lava continues to flow unabated from Fissure 8, feeding a robust lava channel, according to the Hawaiian Volcano Observatory (HVO). Local videographers saw the lava entering the ocean at Kapho Bay at about 10:30 pm local time yesterday (June 3). By this morning (June 4), the flowing lava had created a delta a few hundred yards into the bay. A volcanic haze — known as laze — arose where the hot lava met the water, but it dissipated quickly as wind blew it inland, the HVO said.

Fissure 8 is also releasing stands of glass known as Pele's hair as its lava continues to fountain within the Leilani Estates. This fissure also had a volcanic tornado last week, according to The Washington Post.

Meanwhile, all of the other fissures are inactive, except for Fissure 18 which has sluggish lava flows.

At the summit, a small explosion went off yesterday afternoon (June 3). The rim and walls of the lava lake Halema'uma'u are slumping inward. There have been fewer earthquakes as of late, but geologists expect that the earthquakes' frequency will soon increase in the coming days, which will likely lead to another small explosion.

Fissure 8 is putting on a red-hot show on the Big Island. Last night, lava fountained out of the fissure into a lava channel flowing northeast along Highway 132. Parts of this channel overflowed as it traveled about 100 yards an hour, according to the Hawaiian Volcano Observatory.

Even more stunning was the Pele's hair and other lightweight volcanic glass emanating from Fissure 8. These were carried downwind and accumulated on the ground within Leilani Estates.

In better news, Fissure 18 is slowing to a fizzle and Fissure 22 is now inactive.

Meanwhile, the summit is usually a hotbed of ash plumes, but these have diminished over the past day, possibly because rubble is piling on top of the base of the ever-growing summit eruptive vent, the HVO said. There is still some plume activity, however. This morning, the Summit's plume was whitish, meaning it was mostly steam mixed with ash.

Fissure 8 reactivated yesterday (May 28) and fountained lava to heights of 200 feet (61 meters) last night. Fissure 8 even released "Pele's hair" — delicate threads of volcanic glass — into the air, which were blown downwind and fell west of the fissure.

Meanwhile, fissures 18, 19 and 20 had weak lava activity, with Fissure 18 churning out lava that advanced about 1.2 miles (1.9 kilometers) toward the coast. These active fissures continue to release hazardous volcanic gas emissions. Because of trade winds, the emissions may soon reach the southern and western sides of the Big Island, the HVO said.

At the summit, the vent within the Halema'uma'u lava lake spewed out ash that reached 15,000 feet (4,500 m) above sea level early this morning local time.

An ashy explosion jetted out of Overlook Crater late last night (May 24) Hawaiian time, and reached about 10,000 feet (3,000 meters) above sea level, according to the U.S. Geological Survey (USGS). Small explosions at the summit continued today — "a consequence of magma withdrawing from a shallow reservoir beneath the east margin of [the lava lake at the summit] Halema'uma'u," the USGS said.

Meanwhile, fissure 22 is belching out more lava, and there is low-level spatter (airborne lava clumps) at fissures 15 and 16. Fissure 13 has a little lava fountain in its lava pond, the USGS added.

There is also action at the shore, where three lava channels are now flowing. When lava hits the ocean, it creates a mixture of condensed acidic steam, hydrochloric acid gas and tiny shards of volcanic glass, the USGS said. When these components are blown by the wind, they form a downwind flowing haze, which is known as laze (short for lava haze). This laze irritates the lungs, eyes and skin, USGS said.

Several lava fissures reactivated last night within the Leilani Estates and Lanipuna Gardens residential areas. These include fissures 2, 3, 7, 8, 14 and 21, which are spattering lava, meaning they're throwing chunks of molten rock into the air, according to the Hawaiian Volcano Observatory (HVO).

There are other hazards, too: The fissure eruptions are releasing hazardous volcanic gases, and the ground is still shaking with small earthquakes.

Leilani Estates and Lanipuna Gardens are still home to intrusive guests: erupting lava and cracking ground. Just like yesterday, the middle part of the fissure system is sizzling, with fissures 5, 6, 19, 22 and 23 showing the most activity, the Hawaiian Volcano Observatory (HVO) said. Fissure 9 has a faint glow but isn't producing any lava flows.

Lava is likely still pouring into the ocean, where it is producing small explosions, the HVO said. The lava channel there is now quite high — about 36 feet (11 meters) aboveground. Meanwhile, volcanic gas emissions are still elevated from the fissure eruptions, and small earthquakes are still rocking the area from the active magma underground.

At Kilauea's summit, Overlook Crater is releasing small gas plumes. Winds are blowing these plumes to the southwest, meaning ash may fall in that area, the HVO said.

The most active fissures are in the middle of the fissure system, including fissures 5, 6, 19, 22 and 23, although fissure 17, in the northeastern part of the fissure system, is still weakly active, according to the Hawaiian Volcano Observatory (HVO). Fissures 6 and 22 are feeding lava flows, and fissures 5 and 23 have fountaining lava in the eastern part of Leilani Estates, the HVO said. Moreover, the flow of magma underground continues to cause small earthquakes in the region.

At the summit, Overlook Crater is burping out small ash clouds.

A small explosion tore through Halema'uma'u, the lava lake at Kilauea's summit, early this morning, at 12:55 a.m. Hawaii Standard Time. The blast produced an ash plume reaching about 7,000 feet (2,133 meters) above sea level, according to the Hawaiian Volcano Observatory. This plume is big but not as large as the 30,000-foot-high (9,100 m) plume that the volcano belched out last week following an even larger explosion at the summit.

The lava isn't taking a break. A "moderate level" of lava continues to erupt from the active fissure system in the residential Puna District, which sits next to Kilauea volcano, according to the Hawaiian Volcano Observatory (HVO).

Volcanic gas levels are still high, and weak winds today mean that other areas on the Big Island might be affected. Click here for forecast information. Moreover, lava moving underground (where it's called magma) continues to cause small earthquakes in the area.

The summit is somewhat calmer than yesterday, when an explosion sent ash 5.6 miles (9 kilometers) into the sky. But there is some activity: A "robust plume of gas and steam is billowing out of the Overlook vent and drifting generally southwest," the HVO reported.

The summit at Kilauea exploded today as boulders and a volcanic cloud, more than 5 miles (8 kilometers) high, spewed out of the Overlook vent at the top of the volcano.

The explosion happened shortly after 4 a.m. Hawaii Standard Time, and sent a plume about 30,000 feet (9,100 meters) into the sky, an altitude where commercial airplanes fly, according to the Hawaiian Volcano Observatory.

There are no reports of injuries, but the National Weather Service issued an ashfall advisory. Also, due to high levels of sulfur dioxide, several local schools are closed. [Read more: Kilauea Spews Boulders in 5-Mile-High Eruption]

Lava flows escaping from Fissure 17 are slowing down, only advancing about 100 yards (91 meters) in the past 24 hours, according to the Hawaiian Volcano Observatory (HVO). Meanwhile, high levels of volcanic gas are being emitted downwind of the volcanic vents, and trade winds hitting Hawaii today may bring these hazardous gases to other parts of the island, the HVO said.

At the summit of Kilauea, enormous ash plumes — some reaching as high as 10,000 feet (3,000 m) above sea level — astonished onlookers yesterday (May 15). These plumes came from the Overlook vent, where the lava lake Halema'uma'u sits. It's likely that rockfall into the lava lake led to these plumes, the HVO said. The ash from these clouds dusted communities from Pahala to Discovery Harbor with ash and made it hazardous to operate aircraft in the area.

The surprises didn't end there. Two-foot-wide (60 centimeters) ballistic blocks were found in the parking lot, just a few hundred yards from Halema'uma'u.

Lava continues to pour from several active fissures. Lava flows crept forward at about 20 yards per hour (0.01 kilometer per hour) from fissure 17 last night, according to the Hawaiian Volcano Observatory.

Meanwhile, a new fissure opened this morning in the Lanipuna Gardens subdivision, northeast of fissure 19. And volcanic gas emissions are still high, especially in areas downwind of the volcanic vents. Little earthquakes, many of them magnitude 2 to 4, continue to shake the region as magma roils underground.

At Kilauea's summit, a plume from the Overlook vent — where the lava lake Halema'uma'u is housed — is "steady and gray" because of volcanic ash, the Hawaiian Volcano Observatory said. This plume is enormous — it's rising several thousand feet above ground and drifting southeast. Ashfall is already falling down to earth in the upper Ka'u Desert and downwind of the summit.

There was a stupendous lava show this morning from fissure 17 (the cracks that have opened up during this eruption are numbered, starting with No. 1), with lava fountaining and explosions of spatter that are being hurled more than 100 feet (30 meters) into the air. Fissure 17 also had lava flowing from it. Meanwhile, Fissure 18, which opened yesterday, is only weakly active now, and fissure 19 is emitting a sluggish lava flow, according to the Hawaiian Volcano Observatory.

Although Pu'u 'Ō'ō is getting much of the public's attention, geologists have also been monitoring the lava lake at Kilauea's summit. This lava lake — called Halema'uma'u — is dropping dramatically, and if it goes below the water table, there could be a steamy and rocky explosion, geologists said. [Read more: Kilauea Volcano Could Launch 10-Ton Ballistic Boulders in a Dramatic Explosion]

A magnitude-5.0 earthquake that struck the Big Island on May 3 was followed by lava eruptions that sounded as loud as a jet engine. This prompted mandatory evacuations of the Leilani Estates and Lanipuna Gardens subdivisions. [Read more: Hawaii's Kilauea Volcano Erupts Dramatically After a 5.0-Magnitude Quake]

More than 600 earthquakes have rattled Hawaii's Big Island over the past four days as magma from Kilauea volcano moves toward the residential area of Leilani Estates. [Read more: Do Hundreds of Earthquakes in Hawaii Mean Kilauea Could Blow?]