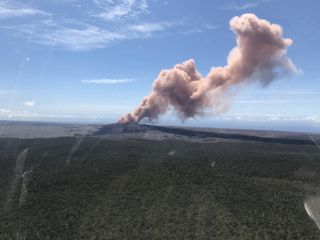 A plume of ash shoots into the air after a magnitude-5.0 earthquake shakes Hawaii's Kilauea south of the Pu'u 'Ō'ō crater floor on Thursday (May 3).
(Image: © USGS/Kevan Kamibayashi)

Hawaii's Kilauea volcano has erupted dramatically, several hours after a magnitude-5.0 quake struck the Big Island on Thursday (May 3).

The eruption spewed lava into residential subdivisions in the Puna district of the Big Island, prompting mandatory evacuations of the Leilani Estates and Lanipuna Gardens subdivisions, the Honolulu Star-Advertiser reported.

A Puna local, Ikaika Marzo, told the Star-Advertiser that jets of lava were spraying 150 feet (45 meters) into the air and that the eruption sounded like a jet engine.

Steam began spewing from a crack that had opened up in the Leilani Estates subdivision around 5:23 p.m. local time, and soon after, red-hot lava began pouring across the subdivision.

Earlier in the day, a magnitude-5.0 quake struck near one of two of Kilauea's active vents, the Pu'u 'Ō'ō crater, causing rockfalls in the crater, NPR reported. The Pu'u 'Ō'ō crater is located on the eastern side of the volcano's rift zone and has been erupting since 1983, Janet Babb, a geologist at the U.S. Geological Survey (USGS) Hawaii Volcano Observatory, told Live Science's Laura Geggel earlier in the day. More than 600 earthquakes have struck the Big Island since Monday, according to the USGS, with most being between magnitude 2.0 and magnitude 2.5.

While the crater is always erupting, a few months ago, something more unusual began to occur: Pu'u 'Ō'ō started puffing up like a molten magma soufflé, with the dome growing ever higher.

The floor of the Pu'u 'Ō'ō's crater collapsed on Monday (April 30), and the deflation pushed magma underground southeast, toward the Puna district. Until the Leilani Estates lava flow on Thursday, geologists weren't sure if magma would pierce the surface.

The National Park Service has closed the east rift zone of Hawaii Volcanoes National Park as a result of the seismic and volcanic activity.