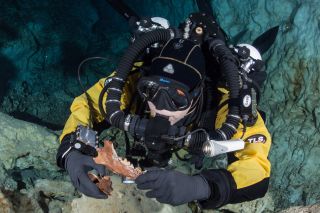 A diver shows the skull and vertebra of an extinct canid known as Protocyon found underwater in Yucatán, Mexico.
(Image: © Copyright Roberto Chavez-Arce)

Divers excavating an underwater cave in Mexico have discovered the bones of giant meat eaters that lived there during the last ice age, a new study reported.

The finding is remarkable, because few ancient animal remains survive in Mexico's hot, tropical climate. But these ancient beasts, the short-faced bear (Arctotherium wingei) and the wolf-like Protocyon troglodytes, fell to their deaths in a deep cave, which was flooded soon after. As a result, their bones were preserved in pristine condition, the researchers said.

Both of these species were far from what scientists had considered the animals' homes. Previously, the creatures were known only from South America. This finding shows that they also lived much farther north, or more than 1,200 miles (2,000 kilometers) away from their known habitat, about the distance from Boston to Miami. [Photos: These Animals Used to Be Giant]

Divers found the animal bones in Hoyo Negro, a completely submerged pit inside the Sac Actun cave system in the eastern Yucatán Peninsula. Hoyo Negro is famous for its anicent human remains; in 2007, divers found the skull and bones of a teenage girl who lived about 12,000 to 13,000 years ago.

The girl's bones, as well as those of the animals — including tapirs, saber-toothed cats, cougars, elephant relatives known as gomphotheres, bears and canids — were well preserved. That's because rising sea levels at the end of the last ice age flooded the caves, turning them into a low-oxygen environment that was favorable for bone preservation, said study lead paleontologist Blaine Schubert, executive director at the Center of Excellence in Paleontology at East Tennessee State University.

However, because much of the attention paid to Hoyo Negro's bones focused on the teenage girl's remains, some of the animals were misidentified, Schubert said. Previously, the bear was mistakenly placed in the genus Tremarctos and the wolf-like species was thought to be the coyote Canis latrans. The new study sets the record straight, Schubert said.

Since the initial excavation, divers have found even more bones. Researchers now have the bones of one, possibly two individuals of the canid and at least seven of the short-faced bear, which date to the late Pleistocene, about 11,300 years ago.

The discovery also sheds light on the Great American Biotic Interchange (GABI), which took place when North America connected to South America and animals from each region crossed over into new lands. Most scientists think that this connection happened about 2.5 million to 3 million years ago, Schubert said.

During one of these early crossovers, the North American short-faced bear traveled down to South America, as did the wolf-like canid. These ancestors then evolved into the new species that were found in the cave, which, until now, scientists had never seen outside of South America.

So, how did A. wingei and the wolf-like creature end up in Mexico? One idea is that they were able to recross that land bridge from South America into North America at a later time, Schubert said. However, it's also possible that when the bear and canid were coming down to South America, some of them stayed in Mexico, the researchers noted. [10 Extinct Giants That Once Roamed North America]

Only one living relative of the short-faced bear currently lives in South America: the spectacled bear (Tremarctos ornatus). This bear has never been found outside of South America. The new evidence suggests that's because A. wingei was blocking its way, likely taking up the same habitat and eating the same food that the spectacled bear needed to survive, Schubert said. "Perhaps they created a barrier," he said.

The researchers did an impressive job of correctly identifying the bear and canid species, said Ross MacPhee, curator of mammalogy and vertebrate zoology at the American Museum of Natural History in New York City, who was not involved in the study.

The study highlights how useful these underwater sites are, especially in the hot, wet tropics where ancient bones usually degrade, Ross told Live Science. "You can get a probe into the past that you don't ordinarily expect to get, and that's the great thing about these caves in the Yucatán."

The study was published online yesterday (May 1) in the journal Biology Letters.