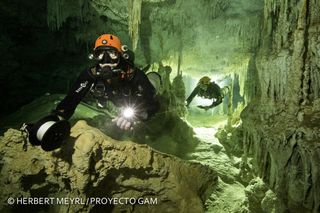 Divers roll out a guide string as they swim through the Sac Actun cave system.
(Image: © Herbert Meyrl/GAM)

A labyrinth of underwater passageways lined with chandelier-like rocky features and lit by sparse sunrays is the world's largest flooded cave system.

The system, located in the Mexican state of Quintana Roo, was thought to be two separate large caves — the Sac Actun and the Dos Ojos. That is, until speleologists (scientists who study caves) discovered a connection between them, researchers with the Great Maya Aquifer (GAM) project announced this week.

The system — now known as just the Sac Actun system, because the larger set of caves officially absorbs the smaller one in naming rights — is 215 miles (347 kilometers) long, or about the distance between New York and Boston. That pushes Sac Actun ahead of the previous No. 1 in the length rankings, the Ox Bel Ha system, also in Quintana Roo. [See photos of the amazing underwater cave system.]

The state, located on the Yucatán Peninsula, sits over a bevy of submerged caves; the Quintana Roo Speleological Survey lists 358 known systems. The Great Maya Aquifer project has been officially exploring the Sac Actun and former Dos Ojos systems since March 2017, looking for links between the two. GAM Director of Exploration and cave diver Robert Schmittner has been exploring the systems for 14 years, according to the group.

The caves are otherworldly. Flooded with freshwater, they're a maze of passageways, stalactites and stalagmites. They're also home to both paleontological and archaeological sites, GAM Director Guillermo de Anda said in a statement.

In 2007, GAM researchers working in the Sac Actun system discovered the skeleton of a teenage girl who lived about 13,000 years ago. The skeleton, dubbed Naia, was found in a dark flooded pit called the Hoyo Negro, 140 feet (43 meters) below the surface, alongside bones of ice-age animals. Subsequent analysis of the bones has found that she lived a hard life and was malnourished. She was between the ages of 15 and 17 when she fell into the pit (which was not flooded back then) and died, and had probably had at least one child, according to a 2017 studyin the journal Nature. Naia's genes suggest that she descended from ancestors who crossed the Bering Strait from Asia; the genetic analysis, published in the journal Science in 2014, suggests that modern-day Native Americans also descended from these same ancestors.

The ancient Maya people who once populated the Yucatán believed that sinkholes into the flooded caverns under the peninsula were the entrance to a mythical underworld. Maya artifacts, such as pots and stone carvings, have been found inside the caves, perhaps because they tumbled in when sinkholes collapsed or because they were tossed in as sacrifices to the rain god thought to dwell down below, according to Archaeology Magazine.

Beyond its archaeological and historical value, the cave system is also part of the Great Mayan Aquifer, the groundwater system that feeds the Yucatán Peninsula. GAM's next steps include studying the water quality of the system. The group is also interested in studying the biodiversity supported by the cave network. Research on the nearby Ox Bel Ha system published in November found that methane filtering down through sinkholes and soil feeds a booming ecosystem of bacteria, which, in turn, become dinner for cave-dwelling crustaceans.

There is also a chance that Sac Actun could get bigger. Schmittner and his cave-diving colleagues think that the system might be connected to three other underwater cave networks, all of which are clustered near one another by the city of Tulum. They plan to search for the underwater passageways that link these hidden caverns.