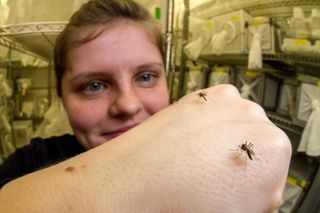 Emily Dennis, the neurogeneticist and lead author on the study, is pictured with research mosquitos on her arm.
(Image: © Alex Wild (alexanderwild.com and @Myrmecos))

DEET works because mosquitoes can taste your body with their legs, and it makes them think your skin tastes super gross, according to a new study.

The chemical has long been known to be the most effective mosquito repellent available, but researchers weren't sure why or how it worked. The new study, available online in advance of publication May 6 in the journal Cell Current Biology, showed that DEET doesn't taste especially gross to mosquitoes' mouths. Rather, they really don't like the way it feels to the tongue-like cells on their feet.

"We were confident then that DEET was doing something interesting and fairly unique on the surface of the skin," lead study author Emily Dennis, a neurogeneticist at Princeton University, said in a statement. (Dennis was a graduate student at Rockefeller University when she did the DEET research.)

That's because, while DEET tastes bitter to mosquitoes that drink it, it doesn't taste any more bitter than other bitter chemicals. And Dennis had previously worked on a team that showed that DEET doesn't keep mosquitoes from landing on people. Only once the mosquitoes land, the researchers showed, does the effect of the repellent kick in and drive the mosquitoes away. [Googly Eyes: Photos of Striking Wasp Faces]

This new work had six stages:

Second, they slathered the skin of their arms in the bitter chemical at very high concentrations. The mosquitoes, they found, were still happy to land on the skin, puncture through it, and drink the clean blood beneath.

Third, they offered the mosquitoes a serving of warm blood protected by a skin-like membrane. When the DEET or other bitter substances were mixed into that blood, they found, the mosquitoes didn't drink it.

Fourth, they tested those compounds on the surface of the membrane with clean blood beneath. Bitters on the membrane weren't effective at stopping the insects from drinking. But with a layer of DEET on the membrane, the mosquitoes still landed on it but immediately took off.

Fifth, they offered the mosquitoes blood beneath a patch of DEET-coated skin that was too small for them to simultaneously drink from and touch with their legs. The mosquitoes still drank, suggesting that they weren't just reacting to the way DEET felt to their mouthparts.

Sixth, and finally, they used a special glue to partially block the taste buds on the mosquitoes' legs. The insects still drank blood beneath DEET-coated skin, albeit less often, suggesting that the legs in particular were experiencing the repelling sensation when DEET worked.

So when you're outside, coated in DEET, know this: You still smell good enough to mosquitoes. They still want to drink your warm blood. But your skin tastes super gross to their legs.