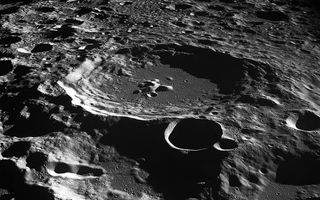 An oblique view of the Daedalus Crater on the far side of the moon, as seen from the Apollo 11 spacecraft in lunar orbit.
(Image: © NASA)

Is the moon all it's cracked up to be? Yes — and then some. New analysis of the lunar surface reveals that it's far more fractured than once thought.

Since the moon formed 4.3 billion years ago, asteroid impacts have scarred its face with pits and craters. But the damage goes far deeper than that, with cracks extending to depths of 12 miles (20 kilometers), researchers recently reported.

Though the moon's craters have been well-documented, scientists previously knew little about the upper region of the moon's crust, the megaregolith, which sustained the bulk of the damage from space rock bombardment. In the new study, computer simulations revealed that impacts from single objects could fragment the lunar crust into blocks about 3 feet (1 meter) wide, opening surface cracks that extend for hundreds of kilometers. This suggests that much of the fracturing in the megaregolith could have come from single, high-speed impacts, leaving the crust "thoroughly fractured" early in the moon's history. [When Space Attacks: 6 Craziest Meteor Impacts]

These findings helped to address questions raised by NASA's Gravity Recovery and Interior Laboratory (GRAIL), a mission that sent twin spacecraft to the moon in 2011 to create the most detailed lunar gravity map to date.

Data gathered by GRAIL showed that the moon's crust was far less dense than expected, Sean Wiggins, lead author of the new study and a doctoral candidate with the Earth, Environmental and Planetary Sciences Department at Brown University in Rhode Island, told Live Science.

Wiggins and his colleagues suspected that ancient impacts could have substantially fractured the lunar surface, "adding porosity and therefore lowering the density," he said.

Using simulations, the study authors found that an impact from an object measuring just 0.6 miles (1 km) in diameter could have opened cracks reaching depths of 12 miles (20 km) in the lunar surface. After impacts from objects measuring 6 miles (10 km) in diameter, cracks yawned to similar depths, but also extended laterally to distances up to 186 miles (300 km) from the impact crater.

"There's quite a lot of damage outside of the main crater area," Wiggins said. "Material is still very broken up, farther away than we would have predicted." Over time, networks of cracks grew and connected, creating a fragmented lunar crust, the researchers reported.

The researchers also used the simulations to explore how similar impacts could affect Earth, which has also been pummeled by asteroids, and they found that gravity played an important role in the quantity and severity of the fractures.

Under conditions with higher gravity — such as on Earth — the surface in simulations suffered less damage from impacts, while lower gravity meant that the surface experienced more damage, the simulations showed. This explains why impacts on the moon created surface cracks that penetrated deeper than cracks from asteroid impacts on Earth.

Piecing together a more detailed picture of the megaregolith will help scientists to better understand how that region conducts heat; this could reveal important clues about the formation of other moons and even planets, Wiggins said.

"It definitely opens doors for further investigation into lots of different processes — not just on the moon, but on other bodies as well, like Mars or Earth," he added.

The findings were published online March 12 in the Journal of Geophysical Research: Planets.