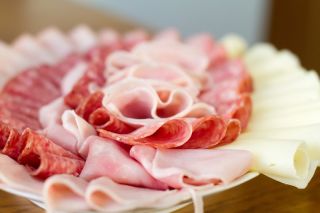 One person has died in connection with a Listeria outbreak tied to sliced deli meats and cheeses, according to health officials.

The outbreak, which was announced on Wednesday (April 17), has sickened a total of eight people in four states (Michigan, New Jersey, New York and Pennsylvania), according to the Centers for Disease Control and Prevention (CDC). All eight patients needed to be hospitalized. The death occurred in a patient in Michigan.

Listeriosis, caused by the bacterium Listeria monocytogenes, is the most deadly foodborne illness. Although serious illness with Listeria is rare, for people who do get sick, the infection can be particularly lethal: An estimated 1,600 illnesses and 260 deaths from the bacterium occur each year in the U.S., according to the CDC.

But why is Listeria so dangerous?

It's important to note that Listeria typically isn't dangerous for most people. Rather, the bacteria typically only cause symptoms in people with weakened immune systems — such as pregnant women and older adults — who already have a reduced ability to fight any kind of infection, said Dr. Amesh Adalja, a senior scholar at The Johns Hopkins Center for Health Security in Baltimore.

But unlike many other types of foodborne illnesses, Listeria also has the ability to get into people's central nervous system, leading to particularly serious complications.

Once inside the central nervous system, Listeria can cause infections in the membranes surrounding the brain and spinal cord (known as meningitis), or the brain itself (known as encephalitis). Both of these complications can be life-threatening.

Pregnant women are 10 times more likely to become infected with Listeria than the general population, according to the American College of Obstetricians and Gynecologists (ACOG). In these cases, the infection poses a risk not only to the woman, but also to the fetus, potentially causing miscarriage, stillbirth or preterm labor, ACOG says. For these reasons, pregnant women are told to avoid deli meats and other foods that are more likely to contain Listeria bacteria, such as unpasteurized milk and foods made with unpasteurized milk, including soft cheeses.

In the current outbreak, patients reported eating sliced deli meats and cheeses before becoming ill. Infections have occurred as far back as November 2016 and as recently as February and March of this year.

At this time, the CDC is not telling people to avoid eating deli products. But the outbreak is a reminder that people at high risk for Listeria infection — including pregnant women, adults ages 65 and over and those with weakened immune systems — should be cautious about eating and handling deli meats and soft cheeses. The CDC recommends that people in this group avoid eating hot dogs, lunch meats, cold cuts and other deli meats, unless they are heated to an internal temperature of 165 degrees Fahrenheit (74 degrees Celsius) or until steaming hot. People in this group should also avoid eating soft cheeses unless they are labeled as being made with pasteurized milk.

Symptoms of Listeria infection can include fever, muscle aches, nausea, diarrhea, headache, stiff neck, confusion, loss of balance and convulsions, according to the CDC.