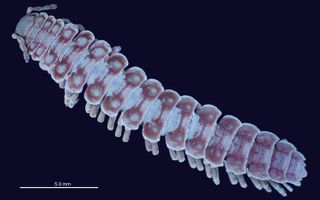 The millipede Pseudopolydesmus canadensis is one of many species that was recently found to glow under UV light.
(Image: © The Field Museum)

For North American millipedes, foreplay has a built-in a lightshow.

Scientists recently discovered that many species of the leggy critters fluoresce under ultraviolet (UV) light — the trait appears to be widespread in this group of arthropods. While the millipedes' greenish glow appeared all over their bodies, it was especially noteworthy in the males' genitals, with subtle color variations indicating different species, researchers wrote in a new study.

These genital structures, called gonopods, are located on the seventh ring of millipedes' segmented bodies, and the features collect and distribute sperm to females. Unique structures on gonopods have previously helped scientists to tell millipede species apart, but UV lighting demonstrated that there were color differences as well that were invisible to the naked eye, the scientists reported. [Gallery: Up-Close with a New Millipede]

Study co-author Stephanie Ware, a research assistant at the Field Museum in Chicago, discovered the fluorescence while working with millipedes in the museum's collection, she told Live Science. Ware had read that one order of millipedes was known to fluoresce; she shone UV lights on museum specimens and found that all of the millipedes demonstrated some fluorescence.

That glow likely comes from a protein in the millipede exoskeleton that absorbs visible light and reemits it in hues of green, yellow and blue, lead study author Petra Sierwald, an associate curator with the Integrative Research Center at the Field Museum, told Live Science.

For the study, the authors described fluorescence in the millipede genus Pseudopolydesmus, which is native to North America and includes about 12 species. The researchers developed a special rig to capture images of the glowing millipedes. A camera on a motorized lift moved incrementally toward the specimen and photographed it at multiple focal lengths. Then, compositing software combined the photo stack into a single image, Ware explained.

Gonopod structures that were a uniform brown color in visible light showed up in "completely different colors" under UV illumination: bright yellow and bright pink against a milky blue background, Ware said.

Why millipedes glow remains unanswered; in fact, it's unknown if they can see their glowing colors at all, Sierwald said. However, this improved view of millipede genitalia could provide scientists with new insights into how gonopods transfer the sperm to the female, she added.

The new evidence will also help to correct the classification of some millipede species that may have been misidentified in the past, said the study, published online today (April 18) in the Zoological Journal of the Linnean Society.