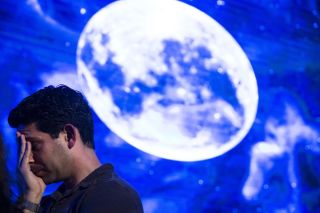 An Israeli man in Tel Aviv react after the Beresheet spacecraft fails to land on the moon on April 11, 2019.
(Image: © Amir Levy/Getty Images)

Crash debris from the uncrewed Israeli lander Beresheet will remain permanently on the lunar surface after SpaceIL's effort to land on the moon failed Thursday (April 11). It was a disappointment for the program and a setback for the private Israeli company's efforts to join the small community of organizations that have successfully landed on Earth's nearest neighbor. But it wasn't the first time that a robotic moon landing failed in this way.

Following its first intentional impact on the moon in 1959 (a mission called Luna 2) and a failed attempt to put a lander on the moon in 1963 (Luna 4), the USSR on May 10, 1965, was ready to touch Luna 5 down softly on the lunar surface. But, as NASA explains on its website, things went haywire. First, gyroscopes in the control system malfunctioned, sending the uncrewed spacecraft spinning around its main axis. Then, thanks to a combination of ground control and mechanical errors, the main engine failed to fire. Controllers, NASA wrote, "stood by helplessly as Luna 5 crashed on the surface of the moon at 19:10 UT on May 12, 1965, in the Sea of Clouds, about 435 miles (700 kilometers) from its planned landing point."

It was the first such crash for an uncrewed mission, but far from the last. [See Spectacular Lunar Mission Images in 3D (Photos)]

As Live Science sister site Space.com reports, Luna 7 and Luna 8 also crashed into the moon during failed landings in 1965, and the U.S. intentionally crashed two Ranger probes into the moon that same year. (NASA had previously crashed Rangers 4, 5 and 6 into the moon between 1962 and 1964.) In 1966, the USSR became the first country to achieve a soft landing on the moon with Luna 9, followed by another with Luna 13. NASA followed that up with a successful soft landing of Surveyor 1, but before the close of the year, Surveyor 2 failed to land softly and instead crashed near the Copernicus crater.

Surveyor 3 successfully landed in 1967; that same year, communication was lost with Surveyor 4 just 2.5 minutes before touchdown on the lunar surface, and NASA concluded the spacecraft may have exploded.

The next few years were defined by successes for both agencies until July 21, 1969, when — just as Neil Armstrong and Buzz Aldrin were completing the first moonwalk — Luna 15 lost contact with ground control and likely barreled into the lunar surface. (Throughout the space race period, a handful of other spacecraft missed the moon entirely, and of course the Apollo 13 crew aborted their mission and returned to Earth rather than complete their scheduled landing.)

The final moon accident before Beresheet came in 1971, when Luna 18 crashed during an attempt to land on some lunar mountains near the edge of Mare Fecunditatis.

Since that time, there have been a number of intentional impacts, most notably the Indian Moon Impact Probe in 2008. But Beresheet's failure marks the first accidental lunar crash in more than 48 years, following a successful Chinese landing Jan. 3.

It likely won't be SpaceIL's final attempt at the landing, however. On camera immediately after the failure, Israeli Prime Minister Benjamin Netanyahu asked a member of the SpaceIL team when the company could next attempt a landing. The man responded that it might take two or three years.

"We're going on this," Netanyahu said in Hebrew. "An Israeli lander will land on the moon. [That's a] promise! A promise! Two or three years."

Editor's Note: This article has been updated to modify the opening sentence, which could have been taken as political commentary.