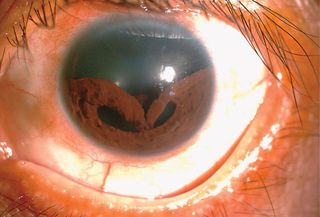 A man in Taiwan was diagnosed with a painful eye injury called "traumatic iridodialysis," in which the iris detaches from it's normal place. In this case, the iris detached at the top, and appears to be sagging downward.
(Image: © The New England Journal of Medicine ©2019)

The man's eye looks like a cloudy fishbowl, or perhaps a terrarium: A dark orb with a layer of a brown, sandy-looking substance at the bottom. But this isn't some kind of special contact lens. It's the result of a painful eye injury that caused the man's iris to tear from its normal place and "droop" down.

The man, a 48-year-old living in Taiwan, went to an eye clinic after being struck in his left eye with a bungee cord, according to a new report of the case, published today (April 10) in The New England Journal of Medicine.

He told doctors that the mishap occurred when he attempted to secure goods to a motorcycle using a bungee cord, and the cord snapped back and hit him in the eye.

By the time he went to the clinic, he reported pain and blurry and double vision in the affected eye.

An exam revealed that the man had a bruised left eyelid and a distorted pupil. An eye test showed his vision was 20/200 in his left eye — the threshold for being "legally blind" in the United States. ['Eye' Can't Look: 9 Eyeball Injuries That Will Make You Squirm]

The man was diagnosed with "traumatic iridodialysis." This type of eye injury happens when blunt trauma causes the iris — the colored part of the eye — to detach from the circular structure behind it, known as the ciliary body, according to the report, from researchers at National Taiwan University Hospital.

The eye is "a complicated, delicate and fragile structure," said Dr. Andrew Iwach, a clinical spokesperson for the American Academy of Ophthalmology (AAO) and an ophthalmologist in San Francisco, who wasn't involved with the case.

"When something strikes the front of the eye, the iris can get 'disinserted,' that is, ripped away from the...inner wall of the eye," leading to iridodialysis, Iwach told Live Science.

In this case, the iris appears to have collapsed — it tore at the top and "kind of came down" due to gravity, Iwach said. But the appearance of iridodialysis can take many forms depending on the angle of the injury and how the shock wave of energy transmits through the eye. "You can get a variety of different patterns of appearance to the eye after injury," Iwach said.

Such injuries can have a number of harmful effects, including bleeding inside the eye, injury to the lens or retinal detachment, Iwach said. It can also cause a "traumatic cataract," or clouding of the lens, to develop.

Fortunately, in the man's case, he didn't have any signs of these other problems. But he will need to be monitored regularly for the rest of his life, because these injuries can cause eye problems to show up years later, including glaucoma, Iwach said.

The AAO recommends wearing protective eyewear, such as safety glasses, when doing home improvement projects or other activities that could increase the risk of eye injuries.

The man had a surgery known as " iridoplasty" to try to reposition his iris. Afterward, he had restoration of his pupil shape and improved eyesight. One year later, the man's iris remained attached with only "mild deformity" and no signs of glaucoma, the report said.