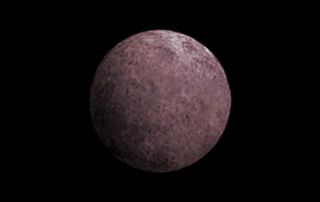 Artist's rendition of a minor planet rotating around the sun known as 2007 OR10.
(Image: © NASA)

Beyond Neptune, there's a minor red planet that rotates around the sun — and it is in need of a name.

Since its discovery in 2007, scientists have called this small planet "2007 OR10," but they are now reaching out to the public to vote on a new name to submit to the International Astronomical Union for its consideration. [The 9 Most Intriguing Earth-Like Planets]

You can vote on one of three names listed on the scientists' website: Gonggong, Holle and Vili.

2007 OR10 sits in the Kuiper Belt of the solar system — an area beyond Neptune made up of small icy objects — which is also home to Pluto. Though scientists don't know the exact size of this minor planet, they think it's about 777 miles (1,250 kilometers) in diameter, making it smaller than the dwarf planets Pluto and Eris, but still one of the top 10 largest Kuiper Belt objects.

This object — potentially large enough to be considered a dwarf planet (a step up from "minor planet") — is likely a mixture of ice and rock, and has one of the reddest surfaces ever discovered in the Kuiper Belt. The researchers think the red color might be the result of sunlight hitting trace amounts of methane ice on the surface.

The ice itself may indicate cryovolcanism, or ice volcano activity, that may have spit out water from the planet's interior, which eventually froze on its surface, said its discoverers Meg Schwamb from the Gemini Observatory in Hawaii, Mike Brown from Caltech and David Rabinowitz from Yale on their site.

The scientists picked these three names for this faraway minor planet based on its proposed composition and color. Gonggong is a chaos-causing Chinese water god that has red hair and a serpent's tail; Holle is a European winter goddess of fertility, rebirth and women with an ability to make snow just by shaking out her bed; and finally, Vili is a Nordic god that together with his brothers defeated a frost giant Ymir and used his body to create the universe.

Which will it be?