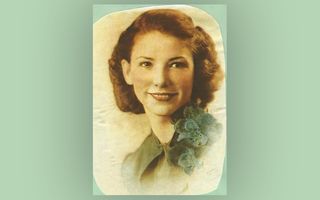 A woman's body that was recently donated to a medical school in Oregon provided an anatomy lesson that was much stranger than instructors expected.

When students at the Oregon Health and Science University (OHSU) in Portland dissected the cadaver of the 99-year-old woman, they found that her liver and abdominal organs were transposed — as if flipped across a vertical axis — though her heart was oriented normally, on the left side, OHSU representatives said in a statement.

This is known as "situs inversus with levocardia," and it affects about 1 in 22,000 births, according to OHSU. But unlike most who have this rare condition, the woman experienced no ill effects during her lifetime — in fact, she was completely unaware that some of her organs weren't where they were supposed to be, her family told OHSU. [27 Oddest Medical Cases]

The donated remains belonged to Rose Marie Bentley, who died in October 2017. Her unusual case was presented today (April 8) in a poster at the 2019 American Association of Anatomists Annual Meeting at Experimental Biology, in Orlando, Florida.

The instructors had never seen this type of organ inversion in an anatomy lab before, "and it's so rare, I'm not sure I'll ever see another one," co-author Cameron Walker, an assistant professor of anatomy in the OHSU Anatomical Services Center, told Live Science.

"Transposed from right to left"

Bentley's body arrived at OHSU in the spring of 2018, bound for an anatomy class, according to Walker.

When the students working on Bentley's body opened up her chest cavity, "they found blood vessels around the heart that were different in orientation," Walker said. He and his colleagues checked the heart, but it didn't seem to have any defects.

"The real enlightenment came when we got to the abdominal cavity," Walker said. "When that was opened, we could see that her organs had been transposed." The liver, instead of being on the body's right side, was situated along the midline, with a larger left lobe. The stomach and the spleen, typically on the left, were on the right.

Information provided by the donor and her family suggested that Bentley experienced "robust health" well into her 90s, according to the authors. Over the years, she had undergone several surgeries: doctors removed her appendix, her gallbladder and her uterus. Indeed, the surgeon who performed the appendectomy told her at the time that the organ was on her left side, instead of on the right.

But the other two surgeons did not mention any anomalies in Bentley's anatomy, and her family said that neither she nor any of her relatives suspected that anything was amiss, the researchers said in the presentation.

Aside from the organs' flipped positions, they "did not appear unusual in any way, and she enjoyed normal function," the scientists said.

Genetic factors that cause situs inversus with levocardia are complex, and it's unknown what precisely take place during fetal development that directs certain organs to grow in a reverse position, according to the National Institutes of Health (NIH).

In many cases of situs inversus, all of the organs — including the heart — are transposed, and people typically experience no associated health problems, the NIH says. However, if most of the organs are reversed but the heart is not, this can cause a growing fetus to develop defects along the midline of the heart, "and those make the heart dramatically less efficient and can lead to very early onset of congestive heart failure early in life," Walker said.

When that happens, survival to adulthood is exceptionally rare — about 1 in 50 million, the researchers wrote in their presentation. Yet Bentley lived to be 99 years old and had no history of heart trouble, making her case even more incredible, the scientists concluded. [Photos: A 3D Printed Heart]

Anomalies such as Bentley's are rare in medical school cadavers, but it's not unheard of for donated bodies to contain anatomical surprises, said Dale Ritter, the lead human anatomy instructor for Alpert Medical School (AMS) at Brown University in Rhode Island.

AMS receives about 55 donated cadavers each year, "and 1 out of 10 will have some significant departure from what is considered typical anatomy," Ritter told Live Science.

For example, certain small muscles in the forearm and the lower leg sometimes aren't there at all, Ritter said. Branching patterns in arteries can also show tremendous variation, which can be confusing and frustrating for students trying to reconcile what they've seen in textbook illustrations with what's on the table in front of them, according to Ritter.

"We encourage students during the dissections to walk around and look at other tables and other donors for exactly that reason — the anatomy can look completely different," he explained.

In the end, Bentley's highly unusual organ alignment proved to be an important reminder to OHSU students that every patient is unique, and that medical professionals need to see their patients as individuals, Walker said.

"There isn't a one-size-fits-all practice where you can always use the same steps and the same treatments to help everyone in exactly the same way," he added.