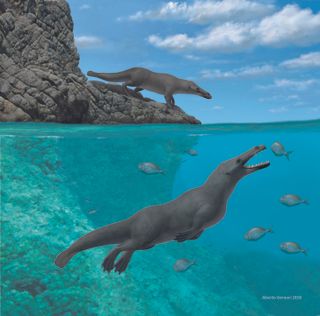 The nearly 43 million-year-old whale probably looked something like a mix between a rhino and a sea otter, and it swam just as well as it could walk.
(Image: © A. Gennari)

Picture an animal that looks like a mix between a rhino and a sea otter: It has a narrow head; a long, muscular tail; and four stocky legs with hoofed toes and webbed feet. A new study suggests that's more or less what the walking, swimming ancestors of modern-day whales looked like about 43 million years ago.

Researchers unearthed the well-preserved bones of an ancient four-legged whale on the coast of Peru, and they detailed their findings in a paper published today (April 4) in the journal Current Biology.

"It's one of those discoveries that shows how little you know," said Jonathan Geisler, an evolutionary biologist and anatomist at the New York Institute of Technology, who wasn't involved with the study. "So that, I think, is very exciting." [Image Gallery: 25 Amazing Ancient Beasts]

For more than a decade, paleontologists have been digging around the barren coastal regions of Peru and pulling up fossils of ancient marine mammals. Lambert said he didn't expect there to be much left to discover, until his team found a jawbone with very large teeth. Encouraged, they kept digging.

"Seeing the first hind-limb elements, the femur, the ankle bones was an extraordinary moment," Lambert told Live Science in an email. "We were all very excited."

Although the bones are several million years old and broken into many pieces, they were nicely preserved and easy to spot in the sediment surrounding them, Lambert said. "This made the excavation very pleasant, with bones appearing one after the other and us moving from one surprise to the other."

The researchers found that the whale's fingers and toes were tipped with small hooves. When the skeleton was assembled, the hip and limb structure made it look like a land-dwelling animal. But its long appendages and large tail bones were similar to those of an otter, suggesting it must have been a proficient swimmer, too.

"We now know that they were still capable [of moving] on land, and in the same time, started to use their tail more predominantly for swimming," Lambert said.

The team named the swimming and walking whale species Perefocetus pacificus, which means "the traveling whale that reached the Pacific."

"Because this is the first record of a quadrupedal whale for the whole Pacific and the Southern Hemisphere, this find significantly increases the distribution of these early cetaceans," Lambert said.

That makes sense, Geisler said, but it would be interesting to look for evidence of these ancient whales across the Pacific Rim. Maybe they actually migrated across the Pacific Ocean. "We really have no idea how capable these whales were [at] moving in the water," he said.

No matter what direction they went, said Geisler, it's impressive that these ancient four-legged whales were able to disperse around the globe with their primitive anatomy. "This is a really cool fossil that tells an interesting story," he said.