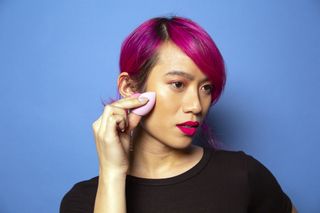 SPF facial moisturizers can block the sun's dangerous ultraviolet rays as effectively as comparable sunscreens, but only if you use them correctly. And according to a new paper published today (April 3) in the journal PLOS One, you probably don't.

Sun-blocking moisturizers are popular beauty products, often marketed as "anti-aging" products. (Protecting skin from UV rays with any sunscreen will keep it looking younger as well as help protect it from cancer, as Live Science has previously reported.) But the researchers behind the new paper found that people are significantly less careful about achieving full coverage using moisturizers than they are with sunscreen, exposing vulnerable patches of skin to UV rays.

The new findings are based on an experiment conducted on 84 college students at the University of Liverpool in the United Kingdom. [5 Things You Didn't Know About Sunscreen]

Researchers gave each student either sunscreen or SPF moisturizer, with the instructions to simply apply the product to their face. After applying, the students filled out a questionnaire in which they were asked whether they had applied the substance to "all areas" of their faces. On a later date, the researchers repeated the experiment, giving the sunscreen students moisturizer and the moisturizer students sunscreen.

In both cases, an overwhelming majority of the subjects believed that they had successfully covered their entire faces.

The main problem? Folks were skipping their eyelids.The students were prone to pass over that sensitive skin area when using either product, but they skipped it most often when using moisturizer.

No group was exactly good at covering their eyelids, though, and subjects tended to miss other parts of their faces as well.

Based on these results, the researchers suggested, it's probably a better idea to use sunscreens than SPF moisturizers.

But in either case, it's definitely a good idea to make sure you cover your whole face, including your eyelids.