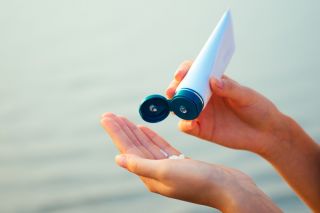 With summer in full swing, many people are dutifully applying their sunscreen before heading outside. But your sunscreen may not be protecting you as much as you think, a new study suggests.

This isn't due to any fault of the product, though, but rather to the way people apply sunscreen — consumers tend not to apply sunscreen in a thick enough layer to get the full benefits, the researchers say.

The study, published July 24 in the journal Acta Dermato-Venereology, found that, when sunscreen with a sun-protection factor (SPF) of 50 is applied in a "typical" way (that is, in a relatively thin layer), it provides at best only 40 percent of the expected protection.

"There is no dispute that sunscreen provides important protection against the cancer-causing impact of the sun's ultraviolet rays," lead study author Antony Young, a professor at St. John's Institute of Dermatology at King's College London in the United Kingdom, said in a statement. "However, what this research shows is that the way sunscreen is applied plays an important role in determining how effective it is," Young said. [5 Things You Didn't Know About Sunscreen]

It's known that applying too little sunscreen can result in sunburns and skin damage. But the new study is one of the first to assess how much DNA damage occurs in the skin when people apply sunscreen in a "typical" way — that is, when they apply less than the amount used when manufacturers test sunscreens to determine their SPF rating. That amount, according to the study, is 2 milligrams per centimeter squared (mg/cm^2).

The study involved 16 people with fair skin who were exposed to ultraviolet radiation (UVR) to simulate sunlight. (Just a small part of the participants' skin was exposed.) Sunscreen was applied to participants' skin at various thicknesses, ranging from 0.75 mg/cm^2 (considered "typical" use), up to the recommended 2 mg/cm^2. Some participants were exposed to the UVR for five consecutive days, to mimic typical vacation conditions. The researchers also varied the dose of UVR exposure, ranging from low to high intensity.

At the end of the experiment, the researchers took biopsies of the skin that was exposed to the UVR. The biopsies showed that, after repeated UVR exposure, there was considerable DNA damage on areas that received no sun protection, even though the dose of UVR used on these areas was very low. (For ethical reasons, the dose of radiation used on unprotected skin was a minimal dose that would not induce sunburn.)

Overall, the findings "demonstrate that public health messages must stress better sunscreen application to get maximal benefit," the researchers wrote.

The researchers also recommend that people use a higher SPF than they think is necessary, given that consumers tend to apply too little sunscreen.

"In theory, an SPF of 15 should be sufficient [to protect people's skin], but we know that in real-world situations, we need the additional protection offered by a higher SPF" of 30 or more, Nina Goad, of the British Association of Dermatologists, said in the statement. (SPF is a measure of how well a sunscreen protects against UVB rays, which cause sunburn.)

The findings also show that people shouldn't rely on sunscreen alone for sun protection, and that "we should also use clothing and shade," said Goad, who was not involved in the study.