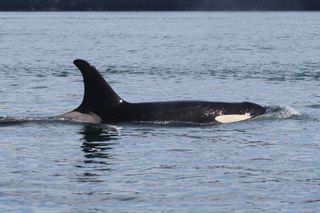 A grandmother orca who was on death's door late last year is still alive, although her health remains in a precarious state, according to researchers who spotted her swimming off the western Canadian coast last week.

This past December and January, researchers tracking the J pod — one of three pods of orca whales (Orcinus orca) that swim along the westerns coasts of the United States and Canada — noticed that a 42-year-old orca matriarch, known as J17, was not looking well.

J17 had what marine biologists call "peanut head," a sign that she wasn't getting enough food. "It's not a good sign when the whales start to lose the fat in and around their heads, behind their blowholes," Jane Cogan, a volunteer with the nonprofit Center for Whale Research, told KUOW, Seattle's National Public Radio station, in January. [In Photos: Response Teams Try to Save Starving Killer Whale]

So, researchers were elated when they caught another sighting of J17 on March 22, while boating in the northern Haro Strait, off the coast of Canada's Vancouver Island. That morning, the scientists found that the J pod "was very spread out in small groups and still slowly heading south."

When the researchers saw a couple of whale blows (when a whale breaches the surface and explosively exhales air through its blowhole), they went to investigate.

"Amazingly, the blows came from J17 and J53!" the researchers wrote in their report, posted on the Center for Whale Research (CWR) website. "J17 was still alive and had even improved a little in body condition since December/January."

However, J17's health is still on the rocks. "Her breath still smelled awful, so the CWR will remain cautiously optimistic that she will survive," the researchers wrote in the report.

A whale's breath can reveal whether the animal is infected with harmful diseases, according to a 2017 study published in the journal Scientific Reports. In that study, researchers collected exhaled breath samples from the three pods collectively known as the Southern Resident Killer Whales (which includes the J pod). The scientists found that the samples contained bacteria and fungi capable of causing diseases. The whales' breath also contained microorganisms that were resistant to antimicrobial agents, which likely came from human waste polluting the water, the researchers said.

In essence, these diseases, food scarcity, pollution and human-made noise disturbances are imperiling the Southern Resident Killer Whales, the study authors said. These threats help to explain why these animals were listed as endangered by Canada in 2001 and by the United States in 2005. As of January 2019, there were 75 killer whales in the Southern Resident Killer Whale population: 22 in the J pod, 18 in the K pod and 35 in the L pod, according to CWR.

This population marks a 35-year low for the Southern residents; three of them died in 2018, including J50, another whale with peanut head who was presumed dead in September 2018. Another casualty was J17's grandchild, who died as a calf. In an exceptional show of grief, J17's daughter, J35 (also known as Tahlequah) pushed her calf's dead body for 1,000 miles (1,600 kilometers) over 17 days.

But there is hope for these whales; a newborn calf from the L pod was spotted in January, and is still believed to be alive, according to the CWR. Moreover, Washington Gov. Jay Inslee has proposed a billion-dollar plan to save the orcas, which includes restoring the habitat of the salmon these whales eat, banning whale watching of endangered orcas and investing in quiet-running electric ferries, according to KUOW.