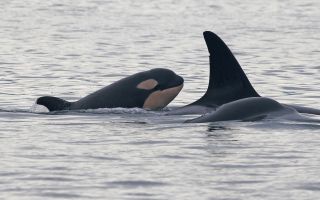 The beleaguered orca population in Puget Sound near Seattle finally has something to celebrate — one of the females recently delivered a baby.

A baby killer whale was spotted in aerial footage that aired on Jan. 10 on local television stations in Seattle, representatives of the Center for Whale Research (CWR), a Washington nonprofit that has monitored the region's orcas since 1976, said in a statement.

While watching that footage, a CWR researcher saw a baby orca swimming close by a 31-year-old female known as L77, one of the killer whales in the "L" pod, according to the statement. [Photos: Drone Reveals Killer Whales]

Orcas live in small populations; this particular group is known as the southern resident killer whales, and it contains three social groups known as the J, K and L pods. From 2006 through 2011, there were 85 to 89 southern resident whales, but their numbers have steadily declined since then, according to the Marine Mammal Commission (MMC), a federal agency monitoring the conservation of orcas and other marine mammals.

On Jan. 11, CWR scientists went out on a boat to investigate the baby sighting, and they confirmed the presence of a new calf at 9:50 a.m. local time, CWR reported.

"The calf appeared to be about 3 weeks old and was bouncing around between [other L pod orcas] L25, L41, L77 L85 and L119," according to the statement. As the adult orcas in the group traveled to the northwest, the young newcomer "kept up well," the scientists reported.

While the researchers were unable to identify the calf's sex, they were hopeful that future observations would provide more information about the new addition to the pod.

Last year, the southern resident population lost a newborn and a 3-year-old female, which reduced their number to 74 — the lowest in 34 years, according to the MMC.

After a newborn orca in the J pod died in July, its mother pushed the corpse around for 17 days before finally abandoning the body of its dead baby. And an ailing young whale nicknamed Scarlet, also in the J pod, slowly starved and was presumed dead in September, despite a month-long effort by veterinarians and biologists to save her life.

With the arrival of the new calf, now dubbed L124, the population of the southern resident whales returns to 75 individuals. However, the calf faces an uncertain future — about 40 percent of killer whale newborns don't survive past their first year, according to the statement.