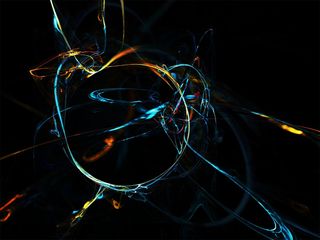 String theory is an attempt to unite the two pillars of 20th century physics — quantum mechanics and Albert Einstein's theory of relativity — with an overarching framework that can explain all of physical reality. It tries to do so by positing that particles are actually one-dimensional, string-like entities whose vibrations determine the particles' properties, such as their mass and charge.

This counterintuitive idea was first developed in the 1960s and '70s, when strings were used to model data coming out of subatomic colliders in Europe, according to a website about string theory created by the University of Oxford and the British Royal Society. Strings provided an elegant mathematical way of describing the strong force, one of the four fundamental forces in the universe, which holds together atomic nuclei. [8 Ways You Can See Einstein's Theory of Relativity in Real Life]

The topic remained marginal for many years, until the "string theory revolution" in 1984, when theoreticians Michael Green and John Schwarz produced equations that showed how strings avoided certain inconsistencies plaguing models that described particles as point-like objects, according to the University of Cambridge.

But this first flowering left researchers with five different theories explaining how one-dimensional strings oscillated in a 10-dimensional reality. A second revolution came about in 1995, when physicists showed that these differing ideas were all related and could be combined with another theory called supergravity, which worked in 11 dimensions. That approach generated the current incarnation of string theory.

String theory is one of the proposed methods for producing a theory of everything, a model that describes all known particles and forces and that would supersede the Standard Model of physics, which can explain everything except gravity. Many scientists believe in string theory because of its mathematical beauty. The equations of string theory are described as elegant, and its descriptions of the physical world are considered extremely satisfying.

The theory explains gravity via a particular vibrating string whose properties correspond to that of the hypothetical graviton, a quantum mechanical particle that would carry the gravitational force. That the theory bizarrely requires 11 dimensions to work — rather than the three of space and one of time we normally experience — has not dissuaded physicists who advocate it. They've simply described how the extra dimensions are all curled up in an extremely tiny space, on the order of 10^-33 centimeters, which is small enough that we can't normally detect them, according to NASA.

Researchers have used string theory to try to answer fundamental questions about the universe, such as what goes on inside a black hole, or to simulate cosmic processes like the Big Bang. Some scientists have even attempted to use string theory to get a handle on dark energy, the mysterious force accelerating the expansion of space and time.

But string theory has lately come under greater scrutiny. Most of its predictions are untestable with current technology, and many researchers have wondered if they're going down a never-ending rabbit hole. In 2011, physicists gathered at the American Museum of Natural History for the 11th annual Isaac Asimov Memorial Debate, to discuss whether it made sense to turn to string theory as a viable description of reality.

"Are you chasing a ghost, or is the collection of you just too stupid to figure this out?" teased Neil deGrasse Tyson, director of the museum's Hayden Planetarium, who pointed out that progress on string theory had been patchy in the previous years.

The most recent challenges to string theory have come from the framework itself, which predicts the existence of a potentially huge number of unique universes, as many as 10^500 (that's the number 1 followed by 500 zeroes). This multiverse landscape seemed to provide enough possibilities that, should researchers explore them, they would come across one that corresponded to our own version of reality. But in 2018, an influential paper suggested that not a single one of these myriad hypothetical universes looked like our cosmos; specifically, each lacked a description of dark energy as we currently understand it.

"String theorists propose a seemingly endless amount of mathematical constructions that have no known relationship to observation," Sabine Hossenfelder, a physicist at the Frankfurt Institute for Advanced Studies in Germany who has been critical of string theory, previously told Live Science.

Other researchers maintain that string theory will one day turn up results. Writing in the Physics Today magazine, physicist Gordon Kane of the University of Michigan suggested that with upgrades currently being conducted, the Large Hadron Collider could yield evidence of string theory in the near future. But the theory's ultimate fate is, as yet, unknown.