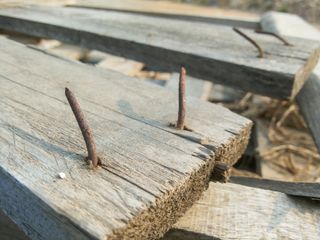 When you think of tetanus, does a rusty nail come to mind? Well, that image might be a little rusty, as tetanus has nothing to do with rust itself.

Tetanus is a serious infection caused by Clostridium tetani bacteria. These bacteria are found throughout our environment, dwelling in places such as soil, dust and feces. [25 Medical Myths that Just Won't Go Away]

Tetanus bacteria can infect the body through open wounds, especially deep, penetrating ones, said Dr. William Schaffner, an infectious-disease specialist at Vanderbilt University. It’s the nature of the wound itself that's dangerous; any object with the bacteria on it, rusty or not, that penetrates the skin and builds a tunnel for the bacteria to make its way into the body, can lead to tetanus.

So why do so many people associate rusty nails with the infection?

"Somehow, someone conjured up this image of stepping on a rusty nail" to describe how a person gets tetanus, Schaffner told Live Science. The image was likely an attempt to convey the idea that the rusty nail was in a dirty environment where these bacteria can be found, he said, but it somehow took "on a life of its own."

But "the environment doesn't have to be visibly dirty" for someone to get tetanus, he said. For example, there have been cases where people contracted the infection after slicing their hand with a kitchen knife.

In the environment, C. tetani lie dormant in spore form, where they can survive extreme conditions for long periods of time, as long as oxygen in present, Schaffner said. But when the spores make their way deep into a person's body, their oxygen supply is cut off.

It's this lack of oxygen that shakes the bacteria to life. Awakened in the body, the bacteria multiply and produce a dangerous toxin that's carried through a person's body in the blood. This toxin, not the bacteria, is what causes tetanus.

Tetanus can be avoided for the most part by keeping up-to-date with vaccines. Children should receive a series of shots that protects the body against the bacteria and adults should receive booster shots every 10 years. In the case of such a penetration injury, the doctor will recommend another booster shot if you haven't had one in over five years.