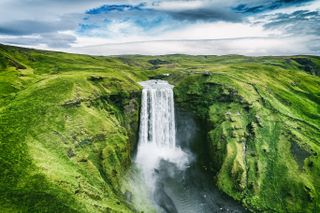 Skogafoss is a waterfall in Iceland.
(Image: © Shutterstock)

The breathtaking waters that cascade off of steep cliffs may be self-made productions.

It was long thought that waterfalls needed an outside force to form — such as an earthquake, landslide or changes in sea level — that molds the rocky edges the water tumbles over.

But a new study suggests that a waterfall can form without any external influence. A river's own chaotic nature can mold the bedrock beneath it and spontaneously create a waterfall, researchers reported yesterday (March 13) in the journal Nature.

To demonstrate this, the group of researchers first created a model of a river in a lab. [Gallery: Most Famous Waterfalls in the US]

They used a material called polyurethane foam to model the natural bedrock that waterfalls form over — this material is scalable to actual rocks but erodes much faster. The foam was placed at a 20-degree downward tilt in a 24-foot-long (7.3 meter) flume.

Then, the researchers turned on the "stream," releasing sediment-filled water down the flume.

They found that, under the pressure of the water and sediments, the once-straight layer of "rock" began to erode unevenly and became wavy. Some parts of the bedrock didn't erode at all, creating crests, while others eroded sharply, creating steep hills. In other words, the bedrock began to look like a set of steps.

In a little over 2 hours, water began to flow over the less-eroded crests and cascade down the more-eroded pockets; the scientists had their waterfalls. These lab-made waterfalls stuck around for about 20 minutes before the crests eroded away entirely. The researchers calculated that their lab-made waterfall's lifespan represented 10 to 10,000 years in a natural river's life span, according to the study.

The authors concluded that some (but not all) waterfalls in nature might form spontaneously, like their lab-made one did — and if they can figure out which waterfalls formed spontaneously and which had help, that could mold our understanding of how our landscapes formed throughout our planet's history.