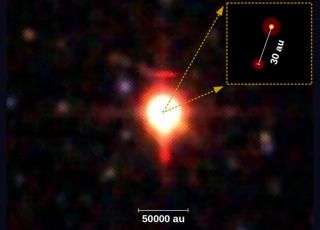 The bright point of light in the center of the image is actually two stars, shown in the magnified image on the upper right. "AU" means "astronomical unit," referring to the distance between Earth and the sun.
(Image: © University of Leeds)

There's a point in space that's 50,000 times as bright as our sun — the signature of a massive star. Scientists already knew about it and named it PDS 27. But it turns out, the dot of light scientists were calling PDS 27 is actually two stars orbiting very close to one another.

The two giant stars are very young and very close together, separated by just 2.8 billion miles (4.5 billion kilometers), or 30 times the distance between Earth and the sun. That finding, published Monday (March 11) in the journal Astronomy & Astrophysics, offers clues about the way in which massive binaries like this form in the first place. [15 Amazing Images of Stars]

"We're not claiming that we found the closest-orbiting massive binary stars," said study lead author Evgenia Koumpia, an astronomer at the University of Leeds in England. But it is very exciting that the two stars were found close together relatively early in their stellar lives, she told Live Science.

Right now, scientists know that massive stars like this (stars at least eight times the size of Earth's sun, up to many thousands of stellar masses) often turn out to be binaries. But researchers don't know why that is, in large part because they don't know how or why massive binaries usually form, Koumpia said.

Another idea, though, says that both stars form out of the same cloud of swirling dust, after it "cracks" into two main clumps. That explanation predicts that young, massive binaries would remain close together. And these two stars are spaced at least as closely as the sun and Neptune, an orientation that seems to support that explanation.

However, this single finding doesn't confirm any one idea or conclusively disprove any others, Koumpia said. Instead, it should be considered a hint pointing gently in one direction, she said.

There's still a lot scientists don't yet know about PDS 27  — like how much of the system's total mass is in one star versus the other. The stars are so close to each other, and so far away from Earth (about 8,000 light-years), that existing images barely reveal that they're distinct stars.

Editor's note: This story was updated to correct an error. The two stars in question are not named PDS 27 and PDS 37. PDS 37 is a distinct binary system also covered in the paper.