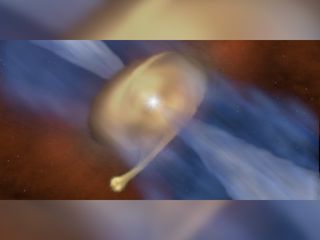 An artist's impression of the disc of dust and gas surrounding the massive protostar MM 1a, with its companion MM 1b forming in the outer regions.
(Image: © J. D. Ilee, University of Leeds)

A close-up look at the birth of a star has revealed a surprise: Not one new stellar body, but two.

In 2017, scientists using a new array of radio telescopes in the Chilean desert were observing a massive young star named MM 1a in an active star-forming region of the galaxy more than 10,000 light-years away. As they analyzed the data, they realized that MM 1a was accompanied by a second, fainter object, which they dubbed MM 1b. This, they found, was the first star's smaller sibling, formed from the spray of dust and gases it holds in its gravitational pull. In a solar system like Earth's, this "disc" can coalesce into planets.

"In this case, the star and disc we have observed is so massive that, rather than witnessing a planet forming in the disc, we are seeing another star being born," astronomy research fellow John Ilee of the University of Leeds in England, who led the study, said in a statement. [6 Weird Facts About Gravity]

Ilee and his team made their observations using an array of 66 telescopes in the high-altitude Chilean desert known as the Atacama Large Millimeter/submillimeter Array (ALMA). By coordinating this array, scientists can detect far-flung objects as if they had an impossibly large optical telescope 2.5 miles (4 kilometers) wide.

"Many older massive stars are found with nearby companions," he said. "But binary stars are often very equal in mass, and so likely formed together as siblings. Finding a young binary system with a mass ratio of 80:1 is very unusual, and suggests an entirely different formation process for both objects."

Stars condense from massive discs of dust and gases that gradually pull together their own gravity. As they coalesce, they begin to spin, and leftover dust and gas begins to orbit them.

In small stars like the sun, Ilee said, this disc of leftover dust and gas can start clumping into planets that then orbit the parent star. MM 1a's huge size, though, meant that a second star could form rather than a planet. It's one of the first times such a phenomenon has been observed, the researchers reported Dec. 14 in the journal The Astrophysical Journal Letters.

MM 1b could possibly have its own disc of space debris, which could theoretically coalesce into planets, the researchers said. But the clock is ticking for the protostar system, Ilee said. Massive stars like MM 1a last only about a million years before exploding into supernovas, he said. When that happens, the whole area will be kaput.

"While MM 1b may have the potential to form its own planetary system in the future, it won't be around for long," Ilee said.